Well, I'm 9 days into my trip and my plans of trying to blog something every night or two kind of went out the window pretty quick once I got checked into the hotel in Berlin. WiFi is available here, but it's pretty hit and miss most of the time. Some times I could only connect with my phone and others, only with the laptop... and I think there was a day I actually was able to get both to connect, but Berlin was such a whirlwind of activities, friends, exploring, visiting that the blogging idea was shelved until I knew I'd be travelling alone with lots of time on my hands. So.... I'm leaving Berlin this morning and heading to Amsterdam and since i have a good 6 hours on the train, I figured now might be a good time to do some catching up. I'm going to skip out on the Berlin part of the trip for now.... as there are so many things going through my head and my heart about that portion of the trip and it's going to take me a while to even process it.... so I thought I would start off with the Poland adventure as it is still fresh in my mind and was just that... a bit of an adventure. 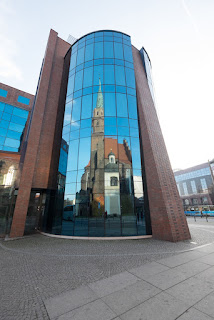 Day 1 of the Poland Trip

First off, I was under the impression we were heading to Warsaw on our first day so when the tour guide kept pronouncing the upcoming city differently than I expected, I just chalked it up to the fact that Americans tend to call many European cities but names other than those used over here. I spent much of the day thinking we were in Warsaw and even posted a few photos stating that fact on Facebook.... only to find out later that we really were in another town all together called Wrocław. Goes to show that sleep deprivation does eventually catch up to you and cause your brain to malfunction a bit... or to keep you from being able to put two and two together for longer than usual. LOL 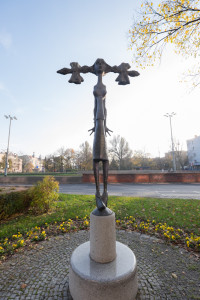 We got to the hotel at around 2:00 pm if I remember right, and then there was a pretty long wait while the poor front desk people scrambled to get everyone checked in and the rooms and keys assigned. We all had a little free time before the first bus tour was supposed to start so I just decided to head out and explore the area around the hotel a little on my own. We were just off of one of the major roads in the city so I only went down a block or two before cutting down some side streets and that is where I ran across this cool little statue, without a plaque or any kind of hint at who she was, I had an instant flashback to Pipi Longstockings. I wasn't sure if she was anyone friends in the states would recognize but those of us growing up in Europe should certainly have known her ... so I posted a photo to Facebook and it literately only took a couple of minutes before my fellow Brats started chiming in asking if that was her. Kind of made me smile to know I wasn't the only one that watched that show on TV as a kid. 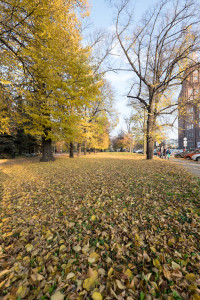 I went around a few more corners and found a really nice park where the Fall colors were still hanging on .... just barely maybe, but it was so much more Fall than I got to see in Washington this year I just had to shoot a few photo of it. It's really too bad this trip hadn't come a couple of weeks earlier as I bet the park looked amazing then.


The free time was almost up so it was back to the hotel to board the bus and get the guided tour. If I remember right they took just down the road where we were then dropped off and given about a 2 hour walking tour around the main city square. Most of the cities in Europe have them, and they are almost always surrounded by great looking buildings and churches. I'll have to go through my photos later and maybe update this with photos from that walking part of the tour.


After that we all kind of took our own route back to the hotel so I did a little more exploring before we all met back up and were taking to this nice restaurant back inside the square. When dinner came, a few of us were excited to see that it appeared we were finaly being served something other than pork and potatoes for dinner.... but alas.... what looked like prime rib turnout out in fact, to be pork... but it was so very yummy I don't think anyone complained this time around. :)


After dinner we were taken back to the hotel and then had the rest of the night free. I think most people were tired and went straight to bed but I wanted to go back out and shoot some more. I figured I may never get here again so I was going to see as much as I could and figured I could just sleep on the bus as needed on the way to Krakow tomorrow. So that was Poland - Day 1 in a nutshell. Saw some great sights, had a great dinner, and made new friends on the bus ride there. Now I'm just hoping I was also able to get some good photos to go along with the rest of the day. We'll see.


Oh, and one other thing I almost mentioned and that I thought was actually pretty cool.... when I first checked into my room, it appeared the power didn't work, but I found out you have to put your key card into a slot in the wall, which then activates the power in your room. If you try to leave your room with the card in that slot, the door won't lock, so you can't accidentally lock your key in your room, but you also can't leave your room and leave every light and appliance on in there. When you think about how much money that must save the hotel each year.... I can't understand why I haven't seen this being done in America yet. Anyway... I thought that was very cool. :)

If I haven't bored you to tears yet.... and you want to read a little more, wait for the post about Day 2. I actually did have a bit of an adventure on Day 2, but one I would have been happy to have not had to go through. LOL

I'll try to set it up to post these automatically a day or so apart and when I can get to a spot and really go through my photos maybe come back and post a few from each day. Right now, I'm an hour into my train ride to Amsterdam, and it's looking like I got really lucky and will have my first class cabin all to myself ... at least until this train pulls into Hanover. It's kind of nice!
Posted by James Miller at 6:38 AM