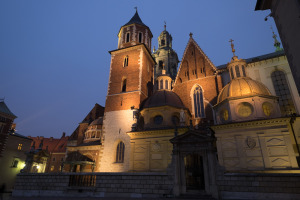 Day 2 of the Poland trip started off with a bit of bad news... just before boarding the bus for Krakow, I was told that there was a screw up with my hotel reservation and the hotel that the group was staying at didn't have a room for me. They had arranged for a taxi to take me to another hotel and I would be staying there along with 3 others on our trip. The news really wasn't all that big of a deal, but not the way you want to start out your morning. Never having been there, I wasn't sure what would count as being "close by". We arrived at the hotel and then was told that since we were going on a tour in about 90 minutes, I should just leave my bag there in a secure back room, and then could go check in to my hotel after the tour and before dinner. 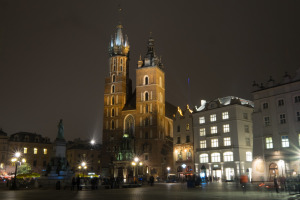 The tour was your typical tour ... we were taken to the main square, into a huge and beautiful church there, and then around the plaza, told some history of the city, and then hiked up to the castle that overlooks the city. I was really enjoying the walk and the weather and just getting to look around.... but it gets really dark here by 4:30 this time of year and I didn't have my tripod with me so I knew most of my shots from this excursion were going to be pretty crappy at best and more than likely blurry.

The good thing is I knew we would have about 4 free hours to do whatever we wanted on Day 3 and I planned on heading back to the castle as soon as our free time started, tripod at hand! The tour included a couple of places I didn't even realize were in Krakow, the most famous being the "Love Bridge", where the whole idea of couples declaring their love for each other on a lock, and placing them on a bridge got started. 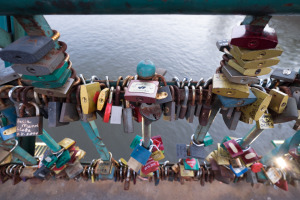 I don't know how you feel about the whole idea, but I have to admit, the sheer number of locks on the bridge was pretty amazing to me. I didn't see many places left where anyone could squeeze a lock in there. Some locks just had names and dates written on them with a sharpie, but others went all out and had engraved plaques on the lock itself. I do have to admit the skeptical side of my brain came to life and instantly wondered how many of these couples were even still together, and had the thought that they should be made to come back and cut their lock off if they break up. If nothing else, but to make room for new loves.

So tour over, we headed back for the hotel with 90 minutes to spare before having to leave for dinner, and once again, I was told that it really wasn't enough time to get over to the other hotel and get us checked in before we had to leave for dinner... I started to wonder just how close was this supposedly "close by" hotel after all.

And yes... for those of you who are already asking the question... we are REALLY in Krakow today. LOL

Once again, dinner consisted of pork and potatoes, the staple of life in Germany and obviously Poland as well. :)

After dinner it was finally time to get over to the other hotel ... the taxi came, 3 of us loaded our bags in the cab, we pulled away from the curb, took two rights, crossed over maybe 3 roads and turned into the driveway of our hotel.... which must have been all of 2 - 3 hundred yards away. LOL All I could think was I could have easily walked my stuff over the minute we got to town had I knows.... and not spent all day waiting around to feel settled in for the 2 nights.

The hotel looked really nice from outside, the staff at the desk was super friendly and helpful, but I could tell right away the room I was given wasn't as nice as the group hotel. I was more than okay with it though as I had a bed to sleep on and a bathroom with everything you need. I figured I wouldn't be here any longer than I needed for sleep anyway so it was really just more about me having a funny story to tell my friends when I got home. It felt like the whole thing was being run by the Keystone Cops... and reminded me that for all their advances in technology in the last 10 years, Poland is still a country where many of the old ways haven't died yet. Things are handled by many multiple people attempting to get one thing done, and that can sometimes lead to misunderstandings or as in this case, someone dropping the ball and then no one knowing where the problem happened.

It had been a long day so I called it quits and just stayed in and got a little sleep ... thinking tomorrow being the last night, I'd get out and shoot as much as possible before and after dinner since that was our first and only free time on this trip.