It's been a few weeks since returning from  Europe and I've been meaning to get around to writing about the first part of my trip,  to finish this story in true Pulp Fiction Style as I'd promised in the first post.   Climbing into the way back machine and hoping my memory is working well enough to even remember a lot of what happened those first few days in Berlin.. I'll try to fill in that blank spot in the story.

The trip to Berlin started off with a very long first flight, from Seattle to Frankfurt, non-stop.  I don't think I've ever made the trip to Germany from here without a stop somewhere along the way (Usually at JFK) so I was wondering how long this flight was going to feel... especially since I don't tend to sleep at all on flights. I've found that for me, the trick to flying to Europe is to get as little sleep the night before the trip as possible....  and then not sleep on the flight. That tends to work out well for me as when I finally get there I'm already feeling really tired but then  I force myself to stay awake until 11:00 - 12:00 pm that first night, until I'm just exhausted so I sleep through the night that first night and get my body on the right sleep schedule right away.

Anyway, enough about my trick to beat Jet Lag when flying east.  :)  The first flight was very smooth and went by fast now that most international flights give you a lot of options of movies to watch.   Once I landed in Frankfurt, they unloaded us onto buses, which then drove us to the far side of the airport, dumped us off at a part of the airport that seemed totally deserted, and then we had to go through customs... which in this case was just a customs agent looking at my passport for a minute, stamping it and sending me on my way.   Now I had to hike back to the terminal where my flight originally dropped me off to catch the short hop to Berlin....  but luckily Frankfurt airport is super easy to get around and I made it back in plenty of time to board my flight.  If you have ever flown through Paris, you don't want to attempt this with less than a 3 hour layover.

Once the second flight landed in Berlin, that feeling of being home washed over me, and I walked out of the airport, bought a bus ticket and jumped on the bus to get across town as if I'd done it 3 weeks ago instead of 8 years ago now.   It always catches my by surprise at how familiar everything is even after all this time.  I made the 30 minute trip to the hotel and got all checked in, said hello to a couple of people in the lobby that I knew and put my stuff in my room.

Since I knew today was going to be a check-in day for most people, I went back down and hung out in the lobby for a while, watching for friends to show up and catch up with others that were hanging around downstairs at the time.  It's always kind of exciting to just see these people again after a few years ...  even though most of us are in touch on Facebook almost daily. 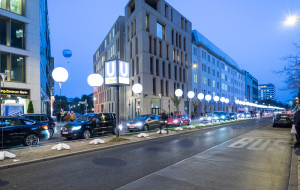 Someone from my class ('83 Rules!) showed up with her cousin and I got to listen in to a couple of very funny conversation at the front desk, between her and another friend that was standing down there complaining a little about his room.  Lots of laughs were had and teasing ensued.... and then the three of us made plans to head down to Brandenburg Gate to see what was going on and do a little sight-seeing. 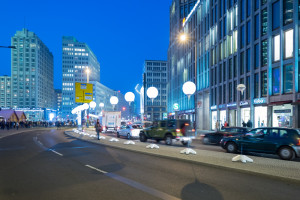 We headed for the Potsdamer Platz U-Bahn station and came out to see that they had already begun to line the old path of the Berlin Wall with the balloons being used in the celebration Sunday night.

I was surprised by how much had already been set up. I couldn't believe I'd actually made it back to Berlin to witness this and was suddenly so happy to be here.  Even though this trip had been in the works for 3 years, it still almost felt surreal. 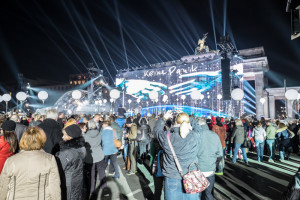 The number of people that were already flooding into the city for this was amazing and to see so many of them out here that same night, wandering around taking photos, soaking up the atmosphere, was really cool to see.  From here the three of us wandered down to Brandenburg Gate where the speeches were going to be given, along with all the musical performances ...  we thought it would be great to see what that area would look like and we weren't the only ones that wanted to see. 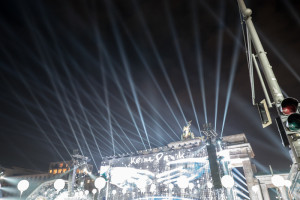 The stage area looked very cool and seeing them test out all the light for the show added to the excitement of being here.  We knew it was going to be a fun weekend for sure!
Posted by James Miller at 6:00 PM