When I travel somewhere I've never been before, there always seems to be something that really stands out to me as I start to look around.  I'm not sure why but I almost always start to pick up on patterns of some kind.  I've been trying to think of good examples to help explain what I mean, but the only thing that comes to mind on this trip is how one of the first things I noticed, was a large number of older buildings throughout the towns and the states in the North East that shared the same unique architecture that I hadn't seen anywhere else before.  They had these cool bell towers that were topped off with what almost looked a crown. I wish I could have found more information about the origin of the design and whether these buildings were all built around the same time or not.  Here is a photo showing what I mean. 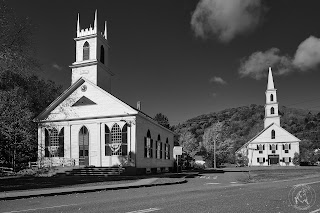 I also couldn't be sure if most of the buildings of that style were churches, or used for something else.  Some had signs out front to make it pretty easy to know what they were, but every not and then I'd see one and find out it was a library or a city hall.  It didn't matter though, I thought they were all very cool looking building.

The other thing I noticed is the number of churches as well.  I lost count of how many churches I saw as I drove around, but after a while, it started to feel like there was one church for every 1000 people in the state.  Well, okay maybe that's a slight exaggeration, but I think it was the highest concentration of churches I'd ever seen outside of the bible belt.

So many of them had the look of that one in the photo above, but every now and then I would run across some a little more unique.  Here are a few photos of some of them that I found very cool looking.  There is something about brick churches that really draws my eye.  Most look best when shot in black and white to me. 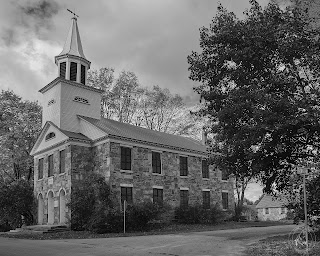 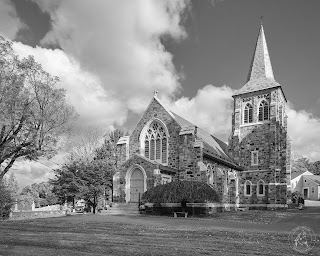 But like all things, there are always exceptions to the rule.  This shot was nowhere near as nice in black and white and the color version.  Mostly because the trees had some color left in them and the fact that it also had a very boring clear blue sky.  I was able to add a tiny bit of interest to the sky by waiting until the sun got low enough to just poke out from behind the church, letting me shoot it with that starburst effect. 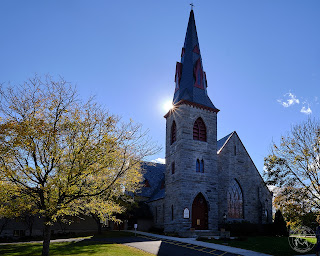 And just to really show how there is always an exception to the rule, the builders of this church decided to be different than all the rest by not only avoiding using a pointed steeple, they figured why use square walls?  I think this might be the only circular church I've ever heard of and for sure the only one I've ever tried to shoot. 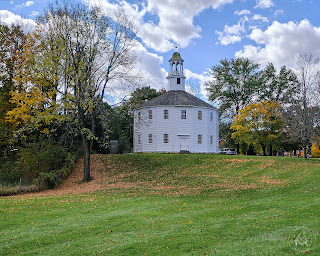 It was a challenge to shoot a cool photo of thing.  Buildings always look better to me when shot at an angle where you use the walls to add perspective and depth to the photo.  Without square walls, there was just no way to do that.  I mean come on... didn't those people who built this thing think about us photographers when they designed it?  ;-)