Okay, so I had to change up the title for the next batch of posts, mainly because I was starting to feel like I was as bad as some of those people that come up with titles for Hollywood movies and I was quickly approaching double-digits for my "part..." titles.  I mean really, who wants to see Taken 12?  I was tempted to come up with some kind of bad pun for this next one, but who would really ever come to read a post called "Spans and the Spurious"?  And then, of course, there would be all that pressure to keep one-upping myself and let's face it, wordplay is not my strong suit.

So, I'll just stick to babbling on about whatever pops into my head when I'm trying to write something about these trips.  I know in an earlier post I made a comment about the covered bridges in Vermont being a little disappointing, but looking back on my trip, that's not entirely true.  Just looking through my photos, I think I've counted more than 20 separate bridges that I actually stopped at and took time to walk around to photograph.  And I know I looked at a number of others on my trip that just didn't have a safe spot to attempt to shoot.

Instead of just posting 20+ photos of these bridges here I'll try to remember what the area was like around them and what if anything special I can remember about each one.

This first bridge is Scott Bridge, which is the longest wooden span in Vermont.  I won't write too much on the history of this bridge as you can just read about it here: 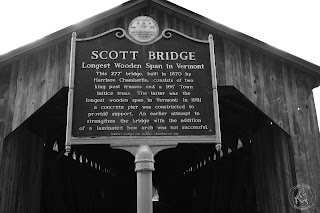 I can remember thinking how impressive this thing looked when I first came around the corner and saw it there, crossing the river.  I was disappointed to see that you could no longer drive across the bridge (one of the few I visited on the trip that couldn't be driven on any longer) but saw that you could still walk it so I found a spot and pulled over to check it out.

What I didn't realize at first was that this bridge was actually made up of what was once two separate spans that had been joined together.  I didn't stop to read the sign when I first walked through it and about midway through, you can see and feel a definite seam where they were joined as it wasn't exactly flat and smooth.  At least now I could see why they didn't let people drive across it any longer.  If you look closely at this photo you can see the change in the angle towards the far end of this shot. 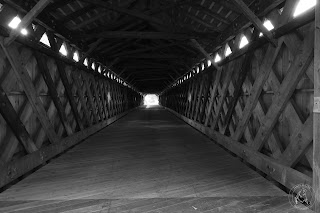 It was really interesting to see all those huge beams and bolt that hold this thing together and really, for it looking mostly plain from the outside, it was still pretty to look at from the different angles. These are all just quick photos of the bridge, straight out of the camera with no editing at all. 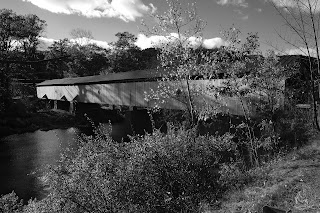 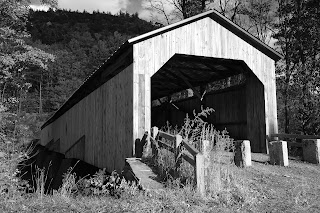 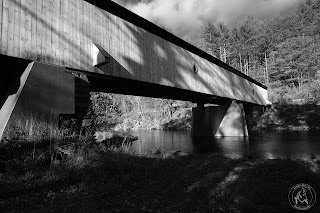