Well the plan was to spend a full day in Berlin after getting back from Poland, but along the way I found out one of the Brats and her cousin / BFF were going to be in Amsterdam while I was traveling to Poland, and I'd just miss them if I didn't head to Amsterdam Sunday. We talked about me coming a day early so that they could show me around and I really wanted to hang out with them at least one night in Amsterdam before they had to leave. My train got in around 6:00 pm and they met me at the train station. We went and stowed my bag away and then hit the streets, walking around the 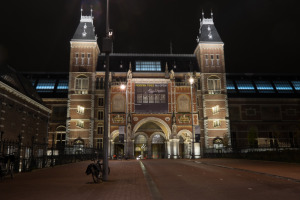 Museum district and hearing all the stories of what they'd seen and did the 4 days they were there. I also heard the story about how a pick pocket tried to still her Passport and money and how she caught him in the act, demanded he give it all back, and the kid did... before running away.  I was impressed!

After a lot of walking around, we found a cool little restaurant for some dinner and ate and talked for a couple of hours.  It was nice to have a night to wind down after all the traveling in the last two days, and was great to be able to laugh again after the prison camp visits of yesterday.  They had to be at the train semi-early so we called it
an early night but I told them I would head to the station with them in the morning and help get their bags on the train and say our goodbyes there.

Day 2 in Amsterdam was a really wet one.  It was the first rain of the entire trip so I couldn't complain. I mean the weather had been fantastic and almost perfect up until that point.  Not bad for November!  After saying goodbye at the train station, I was no on the section of my trip where I was all alone.  I had no schedule to keep, no places to be and decided that since it was raining I would use this opportunity to just walk and see as much of the city as I could since I couldn't really take too many photos today.

It was a good time to explore and try to find interesting things to photograph over the next couple of days. I walked from one end of the old part of the city to the other, looking in shops, watching people, almost being run over by the crazy cyclists who are everywhere in this city.  I know there are cities in America where they claim to have a lot of bike riders, but there isn't a city anywhere that has as many as they do in Amsterdam! 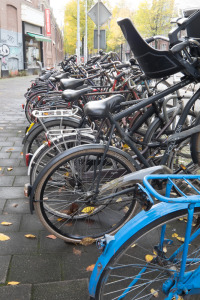 Bikes were everywhere... people riding them, parked and chained up on every bridge, sidewalk, building and even in their own parking garages.  It was something else to watch the Dutch flying up and down every street on their bikes... turning in and out of their own miniature version of rush hour, no crashing into each other or pedestrians I could see.  It was impressive to watch!

So my first full day in Amsterdam was mostly just a lot of walking and getting rained on.  The only other interesting part of the day was the walk through the Red Light District.  It's one of those places you always hear about and I think every tourist in town walks through there one some point in time on their trip.  It was much more fun watching the tourists walking around than anything... There were people of every age group, nationality, couples, groups of friends ... and they all mostly laughed and giggled as they walked up and down the streets looking at the girls in the window.

Oh, before I forget about the cyclists, one kind of crazy thing I saw over and over again, were women in full dresses and heals, women with 1-2 kids on the bike, people texting while riding, people lugging large items like flat panel TVs, pretty much anything we see people doing in cars in the States... they do here on their bikes.

Well that's it for the recap on my first day and a half in Amsterdam.  The weather is supposed to be nicer tomorrow so I'm hoping to get out and shoot photos all day!
Posted by James Miller at 6:00 AM