So I woke up to a very nice but chilly Fall day out there and decided that before I do anything else, I needed to get the number one must see item marked off my list before I let too much more time go by.  I read The Diary of Anne Frank for the first time in 7th grade I think and it was one of those books you read, and you just never forget.  I'd tried to picture what her life must have been like during those years of hiding and always tried to picture what the house was like that they were in.When I decided to add Amsterdam to my list of cities to visit on this trip, I just knew I had to make sure I visited the Anne Frank House, if I did nothing else. There is a museum built next to the house now (well, not really even a house but a office building), that looked kind of deceiving when I first walked up, but the really long line let me know I found the right address.

Even though the line went around the block, there was no way I was skipping this, so I just got in line and waited.  It was funny but to keep everyone entertained, they actually provide free WiFi in line so you can surf the Internet on your phone while you wait.  I used the time to catch up on Facebook and browse all the photos everyone has been posting from their trips.  The wait wasn't too bad really, maybe 45 minutes and then it was into the building. The first thing that took me by surprise was the size of the rooms and the building itself. I guess I'd always pictured something smaller every time I read the book.

You slowly work your way through each of the rooms in the office building, with notes and photos on the walls here and there telling you what each office space was and who sat where and it explains their part in helping the Frank family hide out. And then you get to the movable bookcase which was almost exactly as I'd imagined, even if the rest of the house wasn't.  Needless to say, after having just been to Auschwitz, it hit me even harder finally visiting here, knowing the fear they must have felt and the horror that was ahead of them.

There were a couple of places in the house that were sadder than others, but I won't spoil it for anyone that plans to visit on their own one day.  Let me just say, it's worth the visit and the wait in line. 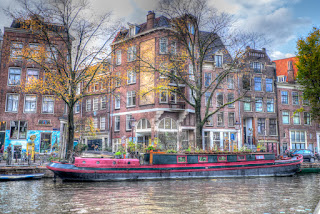 I left there feeling a bit melancholy again and decided the best way to clear my head was to just walk and take photos as much as possible the rest of the day.  Amsterdam is made up of a number of canals that are circular and run in parallel to each other so I started walking one of the outer canals and walked it end to end, before moving in one canal closer to the city center, and walking back the other way.... working my way back and forth until I made it back to my hotel.  It took me close to 6 or 7 hours but was a lot of fun seeing as much as possible, and I could feel my artistic side kind of wake up as the day wore on. 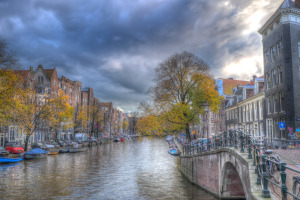 Amsterdam has the feeling of a city that painters must love and I decided to process a few of my photos with that kind of look in mind.  Some of the better ones I've posted to Facebook already, and since I think the only people reading this are also friends on Facebook, I'll put a couple of others here.... even though they aren't nearly as good. 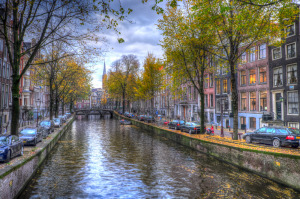 All in all, it was a great day, long, introspective, and motivating as well. I think I walked 15 miles and it was time to hit the sack!
Posted by James Miller at 6:00 AM