Yesterday was just a travel day for me which mostly involved waiting around train stations and sitting on trains all day.  One good thing about it was that I gave my aching feet a bit of a rest and I finally got a chance to go through some photos from my days in Bruges that I hadn't even looked at yet. 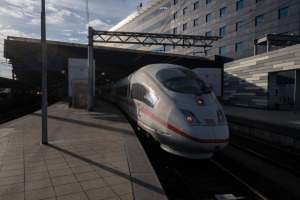 The first part of my trip out of Bruges was on one of the high-speed ICE trains that run through Germany.  This things are fast and quiet.... and such a great way to travel.  I think at one point I noticed we were going 168 km/h.    I think that's like 32 miles an hour or something.   ;-) 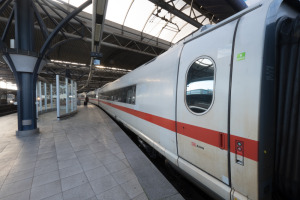 The nice thing about riding 1st class on the trains here is that you tend to end up with cabins all to yourself on a lot of these trains if you're not traveling during tourist season. That gave me time to spread out a little, turn on some music and work on editing a few photos.  I had a few hours between cities before I would have to change trains so it was good timing.

The only glitch I ran into on this trip was when I changed trains in Cologne, there was some construction going on outside of the train station that had most trains delayed by almost an hour.... but as I found almost everywhere on this trip, people were pretty friendly and I ended up talking with a German girl who was waiting for the same train on her way home from her Grandmother's funeral.  When I first talked to her in my bad German about the delay, she said she really didn't speak English, but about 30 minutes later came down to find me and sat and talked and her English was much better than my German.  It was nice to pass the time talking to someone and eventually the train showed up and I said goodbye as I headed down to the 1st class cars.  No sooner did I sit down, than two "kids" came into my car to sit and at first didn't really say anything but then asked if anyone else was sitting in there... I think I surprised them when they realized I was American as well... they got pretty excited as they didn't speak German. One was here as an  exchange student, and the other was her brother who had just gotten to Germany the day before.  They had a lot of questions about my trip, and what they should see while here... and it was fun to chat with them until they got off at the next stop.  It's probably one of the most fun things about traveling by train in Europe.  You tend to meet all kinds of people from all over the place.

The rest of my trip to Heidelberg was quiet as it was a late train and not busy at all. When the train got into town, I was pleasantly surprised to find the hotel literally outside o the train station doors ... just about 100 yards to the right.  That was good because I was pretty tired after traveling all day.

Okay, I guess I rambled on way too much about the train trip... didn't realize I had that much to say about it.   That's it for now!
Posted by James Miller at 6:00 AM