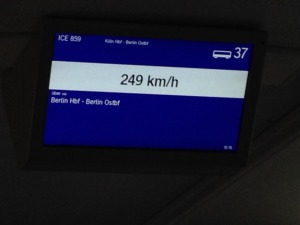 Well today was another travel day but this time not nearly as long a trip as I took leaving town.  Total travel time today was just under 6 hours between 3 trains.  The timing was pretty good so that I didn't have to wait more than 20 minutes between any two trains and then taking the ICE trains the the biggest part of the trip, the countryside flew by.  There were large portions of the trip where I looked up and saw we were doing close to 250 km/h which if I'm still doing my math right, it close to 60 mph.  ;-)

The plan tonight when I got to Berlin was to get to my hotel and get checked in as quickly as I could, and then grab my camera gear and head across town to meet a couple of friends for dinner.  I figured after dinner I could take my time working my way back to the hotel and stop and take photos of some of the bigger tourist spots at night, which hopefully a lot fewer people in them that there were back at the beginning of my trip.  We decided to meet in the East part of Berlin and have dinner at a really nice quiet Restaurant.  They started off telling me that we were going to speak German most of the night since I understand most everything W being said... and then I could just answer in English when I couldn't think of the words I needed (which turned out to be a big portion of the time).  It was cool to sit and have them spend most of the night sharing stories in German though and only once in a while having to stop to explain something they said.  The most interesting part of the night came when the subject of the Wall came up.  For some reason I never realized that they were both born and raised in East Berlin during the days of the wall, and their story of what that was like was fascinating to me.  We talked politics, health care, jobs, pretty much a whole range of things that kept the conversation super interesting... just hearing their views of America and Americans was very cool to me.

The conversation was so interesting that We ended up closing the restaurant down, and as we walked tot he train to head our separate ways, found we'd just missed the last train which caused a bit of a dilemma on how I was going to get back to the hotel.  Just about the time we were trying to figure it out, a couple came walking up and needed to head my way ....  we decided to share a cab as they lived about half way back to my hotel... and the guy told me to jump in with them, he'd pay for his part of the trip and then I could pay the taxi the rest of the way.  It was another reminder at just how nice people can really be.  The taxi ride was interesting as he was from Spain and she was from New York which made for interesting stories on the drive.   Once again, it was a great day with an adventure within my adventure.

Tomorrow is my last day in Berlin and it's going to be bittersweet.
Posted by James Miller at 2:50 PM