Today is my last full day in Amsterdam and I feel as though I've seen as much of the canal areas of the city as I can without just re-tracing my steps over and over again, so I decided I was going to walk to a point away from the center area to a cool bridge called the Python Bridge that was also on my list of must sees while I was here. 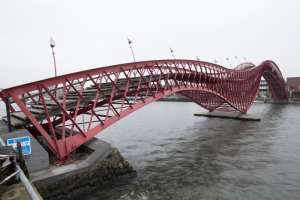 I'd seen photos of it before my trip and it was just cool enough and unique enough that I wanted to see it with my own eyes, and walk across it a
couple of times.  So I did some quick research on Google to get the address and took off.  The only bad thing about heading here was that there wasn't going to be much to see on the way there or back, and it was going to take up a few hours.... but I was okay with that. 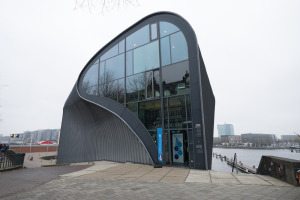 I thought I could wander around on the way back and see if I could find some more modern architecture that would yield itself to some cool photos. 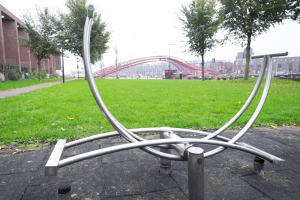 I finally made it to the Python Bridge and it was pretty cool looking, and in an area I never would have imagined from the photos I'd seen before.  It sat at the end of a canal that was bordered by apartment buildings on both sides and was much more residential than I expected.  It would be a very cool area to live. 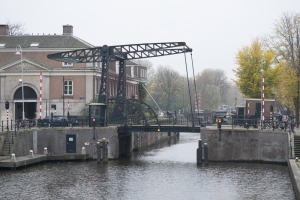 I just remembered that I forgot to mention one kind of interesting thing I found while walking the canals yesterday, was that I found a number of very cool looking little drawbridges that I'd never seen the likes of before. 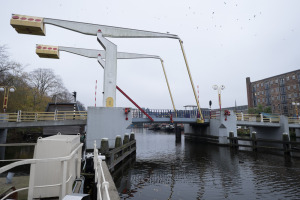 It only makes sense that bigger boats need a way to get through there as well. The interesting thing was the number of different kinds of bridges, some draw bridge like at home, some small bridges that twist open, and some that almost looked like they were build from a Lego kit or something and could be opened by hand by anyone with the need. I'm sure that's not how they work, but they sure were small.

Something else I forgot to mention was that on Sunday I also found this cool bar near my hotel that showed NFL football, and they just so happened to be showing the Seahawks game!  So to get my
fix of Football, I headed there just before the game started, got something to drink and then had a couple of Americans sit at my table with me.  Turns out they were from Seattle!  What a small
world.  They only stayed until half-time and had to get back to their hotel since they were here for work unlike me.  During the second half of the game I overheard 3 British kids talking about football and trying to figure out some of the rules and they called me over to join them to ask for help.  It was a great time sitting there and hearing what they thought about the game, comparing it to Rugby, talking about violence outside of the game and players being suspended and
hearing their take on it all.  People on the road tend to be so friendly and I'd talked to more than my fair share of really nice people while here for sure.

So that was mainly my day today.  I decided I wanted something a little different for dinner after all that walking and hit an Irish bar around the corner from my hotel and had Cottage Pie for
dinner.  It hit the spot for sure  :)
Posted by James Miller at 5:00 PM