The alarm went off WAY too early but I was on a tight schedule to get down in time for the taxi so there was no hitting snooze today.  I made it over to the hotel in time for a little breakfast before our long day ahead... 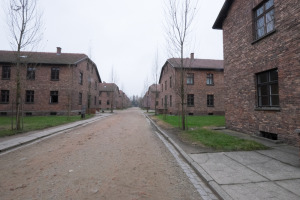 I'd read and watched many stories about the concentration camps over the years, and about man's inhumanity to man, but yet, knowing I was going to visit the place were those atrocities actually happened kind of put a damper on the mood that morning.  As I climbed onto the bus, I realized I wasn't the only one feeling that way. 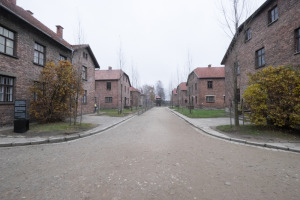 I guess I'd never really seen photos or videos of the actual camp over the years, but only photos of the people effected by them.... because when we first got there and went inside, the first thing that caught my eye was the size of the buildings there, and the fact they were all brick and almost looked like military buildings from places we had been stationed over the years.  In fact, they looked a lot like the last building I worked at as a contractor on Fort Lewis.  It just caught me off guard but once the tour started and we were walked through the buildings, shows some of the evidence left behind, the enormity of the horror that happened there really hit home. 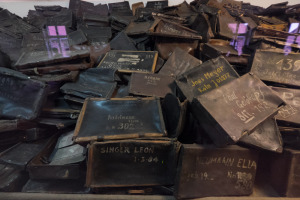 There were rooms filled with children's shoes, women's hair, family suitcases, and just all kinds of other household items that were seen fit to reuse after those families were murdered.  Knowing that what we were looking at was just a drop in the bucket...

I can't even being to put into words the horror and evil that happened there. It was heartbreaking and once again hammered home the point that we has humans, can't forget the past, in order to someday hope that it is never repeated. This is a hard day to write
anything even remotely humorous... and the second camp was must more of the same, only showing that as the Nazi machine got rolling
that horror grew even more terrible.  There are plenty of books, photos, movies... information out there for those of you that might to read up more on all of it again....  but I just ask that we never forget how evil man can be ... and hopefully we can all do our little part to help treat each other better and make this world a better place.... even if it's just one of us at a time.

The bus ride back to Berlin was a long one.... and mostly quiet.... it didn't have the same energy as the trip down but as we got closer to home, there were some fun stories and laughs begin shared again.  I think this touched everyone, and I don't think it is a day any of us will forget.

That's it for now.... I'm only on hour 3 of my train ride to Amsterdam, but suddenly I'm thinking I need to watch a movie or something to shut the brain down for a while. I will post more from Amsterdam in the next day or two.  :)
Posted by James Miller at 6:00 AM