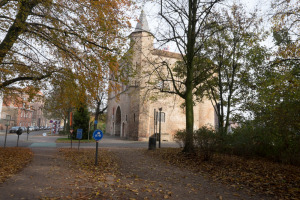 My plan when I got up today was to head out fairly early and walk the outer ring canal of the city, taking a look at all the gates that were still in place from the Medieval  Days when the only way in and out of the city was through these gates. 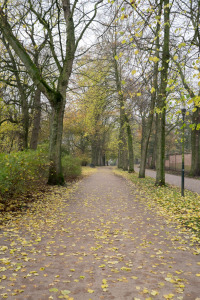 There is a nice park like area that runs along the canal with nice paths for both walking and biking, and like most of this trip so far, it was a beautiful fall-like day.  As you walk around the old city limits and you look inward, you can almost imagine what life must have been like back then.  It almost has the feel of a city straight out of Game of Thrones, where everything is still cobblestone and you can almost hear the horses and carriages making their way to market. 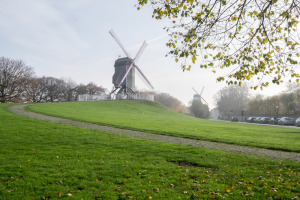 One thing I hadn't expected to see here were Windmills and as it turns out Bruges has 4 of them along the eastern side of the ring.  That's 3 more Windmills than I saw in Holland while I was there.... and Holland is the country known for them.  Go figure right?

Something else that stood out, is that there wasn't really all that much traffic in the city center, at least not nearly what I would have imagined from the number of buildings and shops here. Traffic wasn't heavy but it was very steady as I began to realized every time I went to take a photo.  As one car / cyclist left the photo another would enter... spaced almost perfectly apart, to the point that I started to wonder if I was on some kind of weird hidden camera show and they were just messing with me to see how long it would take before I would give up waiting and just shoot the photo and move on. LOL

After making my way around the outer ring and checking the maps posted at every tourist attraction I'd seen most of what I could see on the eastern side and then I just began weaving my way back and forth into the city, checking out all the cool churches and buildings I could see.  Some of the streets where pretty narrow and it looked like most of them were one way.  It was almost like walking through a maze which I found a lot of fun, just seeing if I could remember all the twists and turns I was taking as I tried to slowly work my way towards the main square and then back out again in another direction.

It was really interesting to watch the drivers and cyclists doing the same thing and they flew up and down the little alleys.  I funny thing I noticed during the day though, was that the drivers here had a very bad habit of stalling their cars on a regular basis.  I don't think I've ever seen or heard so many cars stall out at stops and then have to b what e restarted.  I wasn't really sure what that was all about?  They all acted like it was a totally normal thing to do though, so I'm thinking they must just use really watered down gas here and the cars just can't idle on it... yeah, that would be my excuse anyway. LOL

All in all, it was just a perfect day for walking and taking in the city, and I began to realize if you only had one day to do it, you could....as long as you didn't also want to take the time to shop and sit in restaurants eating and drinking and people watching.  I'd given myself 2 full days here, and by the end of the day today, I'd seen and taken photos of just about everything I could think of here.

Even though I can't speak the language at all here, when you see things in writing, it's pretty easy to figure out what almost everything says.  It's a weird mixture between German and English and some of it almost looks like it was made up because it's so
close to one of those two with just a little spelling twist.

Okay, enough rambling for today, my feet are actually feeling the miles for the first time on this trip and I think some of that has to do with the cobblestones I walked on for 10+ hours today. I think tomorrow will be a much more laid back day since I'd seen so much today.  There are a few sights I still want to take in, a couple I want to go back and re-shoot, and then I think I might take in a City Bus Tour and go see the Salvador Dali exhibit in the museum here.   Sounds like a pretty mellow day. :)
Posted by James Miller at 6:00 AM