Okay so I'm actually writing this at the end of my 2nd full day in Iceland, but while the memories are still fresh in my head, I figured I'd start this blog about my Iceland adventure ... where the real adventure started.   Climbing out of the airplane, it fells like you stepped back in time for a few minutes.... you actually climb off the airplane with stair onto the tarmac and then walk into the terminal.  I haven't done that at a "major" airport in a very long time so it was kind of a fun start to the trip.  I had a rental car all lined up and they picked me up just outside of customs and within 30 minutes I was in my car and on the road.  Never having been to Iceland I wasn't really sure what to expect, but it was really easy getting around since I brought my GPS with me, and unlike in the States... there was absolutely no traffic on the road even though it was close to 7:30am on a Sunday.   I had preloaded my GPS with all the sites I wanted to hit on this trip, and broke it down by each day so I just started with Day 1 and hit "Go!". 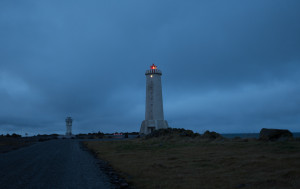 I had one major site to see on day 1... and it was a little out of the way off everything else on my list, but I was able to find a couple of other cool stops to make along the way.  These two Lighthouses were the first on that extra lis.  It was still dark and raining when I got there, and super cold.... so it was my first chance to try out my new coat and gloves that I purchased just for this trip.  It was nice to find out right away that they were going to work pretty well. 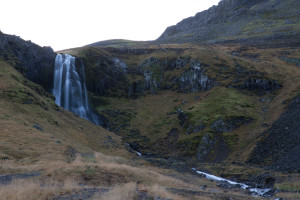 After the light houses, there was a very cool looking Black Church I wanted to stop and and take photos of... it was on the south side of the next Penninsula over and next on my list.  It was a long drive and I quickly realized this was going to be a country I could never stop and take photos of every waterfall I saw, as there were waterfalls everywhere!   Not just puny little things either.  Some looked pretty hard to get to and on the other sides of private property, but then there were some like this one that was right in the middle of a small down, behind a church and apartment building.  It was kind of wild to see these everywhere. 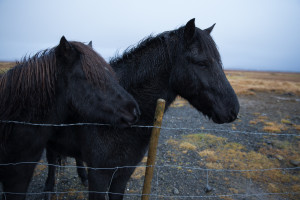 I'd also heard so much about the Icelandic horses and had seen so many photos of them that I wanted to stop and see them for myself during my trip.  Turns out I didn't have to wait long as horses are everywhere here.  I finally passed a field that had a nice pull out next to it, and no sooner did I get out of my car than these two came running over to the fence to say hi.  Turns out that the horses here are all very friendly and seem almost as interested in visitors and visitors are in them.  They usually have these great flowing manes that are really pretty.... but with all the rain these two were mostly just looking and feeling pretty wet. 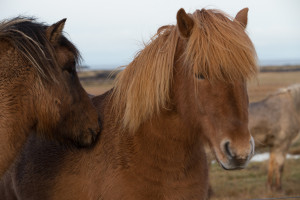 I made another stop a little later in the day after the rain had stopped for a few hours and saw some drier horses where you can see just how long their manes are ...  on a bad hair day maybe.  Once again though... they came right up to the fence the minute I got out of the car and wanted to be petted.  It was pretty cool. 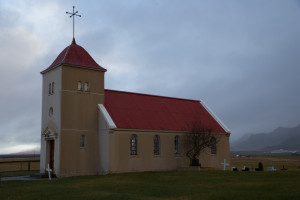 There are churches like this one all over the Iceland countryside so I thought I'd stop and shoot at least one of them to remember what they looked like.  They all seem to sit off on a hill so they can be seen from far and wide, and they each have these small cemeteries besides them.  It almost gave the appearance that the church and cemetery was just for the people of that small town.  No idea if that is really the case or not. 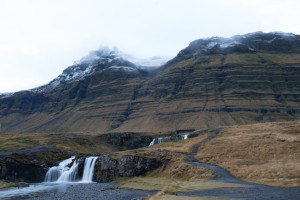 And then I finally made it to my final destination for the day.  This isn't the actual shot I was going for, but it is the location where I wanted to take it.  I'm saving that shot for after I get home and have a chance to edit it and make it look really good.  These shots here are all just straight out of the camera and not too exciting.. other than to serve as reminders about the first day of my trip in Iceland :)
Posted by James Miller at 4:16 PM