Day 2 really felt like a continuation of day 1, and I guess in many ways it was.  My first day in Iceland was ending and I'd shot the photo I most wanted to get that first day, so I headed into the nearest town to find some dinner and see if I could get lucky and find a hotel room since I hadn't made reservations for the first few days of my trip, wanting to not be tied into a tight schedule in case weather created some problems for me those first few days. 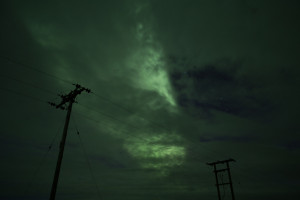 I found what appeared to be the only hotel in town, right after a tour bus dropped off a huge load of passengers.  The lobby was really crowded and it looked like there was no way they would have any spare rooms... so the hotel was out and not really finding a restaurant that looked good I decided to just grab some snacks and the one and only open store and maybe hit the road and get an early start on my day 2 plans, especially since it was still only 7:30.  With the short daylight hours this time of year, it made more sense to get in a few hours of driving before I got some sleep, instead of burning half of my daylight hours just getting to the next destination in the northern part of Iceland.  Turns out this decision was the best one I have made in a very long time and it allowed me to cross off one of the longest standing items off my bucket list, and that was to see the Aurora with my own two eyes one day.   As I stopped to top off the gas tank on the car (getting gas in Iceland is another story all on its own... maybe I'll write about it after my trip is over...), I looked up at the sky to see if the clouds had cleared up any.  All I could really see were clouds still, but something about them didn't seem right. They seemed just a little too bright for clouds at night, when there isn't a moon in the sky.  Out of curiosity, I grabbed my camera out of the car and pointed it at the clouds to take a picture.... and imagine my surprise when this is what I saw....   Yes, behind the clouds was the Aurora!

Needless to say, I was So excited and then so bummed at the same time as I could tell the Aurora was up there, but couldn't see it with my eyes because of the cloud cover.  I got back in the car and began to head north again, watching the sky every 15 minutes or so to see what the clouds were doing.  The further north I got, the less cloud cover there was, but it appeared to still be fairly cloudy.   I took another break and shot another photo around 8:30 and to my surprise, those weren't clouds up there at all anymore but was actually just the Aurora faintly dancing across the sky.  To make a long story short, as the night went on, and I got further and further north, and the Aurora would come to life and dance across the sky super bright for 15 - 20 minutes before fading again, over and over again until around midnight it put on the best show of the night.  That show lasted at least 30 minutes and I can't even begin to describe how amazing it was to watch.  There were ribbons of light that looked like they were falling to the ground, while other sections of the sky just flickered and danced around and a few times there were what appeared to be huge thunderclouds of color that would suddenly roll across the sky ... back and forth.  I shouldn't admit this, but I sat out there in the freezing night air, giggling like a little kid ... giddy beyond belief.

Oh, that went on a little too long... so let me just say I did manage to catch a 2 hour nap around 6:00 am ... when I just couldn't stay awake any longer and most of the show had died down.  After waking from my nap, I made the hour long drive to my next stops, which were two of the coolest looking waterfalls in Iceland and the only reason I made the extra long trek all the way north.  It was an amazing night, followed by a fun day of chasing waterfalls with my camera.    I haven't really had time to look at the waterfall photos from today and I probably need to do a little work on them to do them justice, but know I'll be sharing them later once I'm home and like how they look.

I called it a night a little early tonight as I am dead tired.  I found a room with a great view across a lake, and as I'm typing this, the Aurora is doing another dance outside my window and I can look over the top of the laptop and watch it go.  It's a little unreal and so much warmer than the show last night.  :)
Posted by James Miller at 8:00 AM