Day 5 was going to be all about waterfalls, with plans to visit two of the best known and biggest waterfalls on the South Coast of Iceland, Seljalandsfoss and Skógafoss. The day started off with the first traffic I’ve seen during my stay here, when there was a car accident on the freeway leading out of Reykjavik to the ring road heading south. It was really strange to see any kind of traffic at all much less an actual backup of any kind.

Once we were on the road I saw the real first snow and ice of the trip. The roads were actually in really good shape even though they looked like they might be really slippery for a while there. We stopped at the first waterfall, Seljalandsfoss, and were treated to answer of the big question… “where do Dippin’ Dots come from” The answer… from the skies in Iceland. What dumped down on us wasn’t snow or hail, but Dippin’ Dots, and they covered everything. 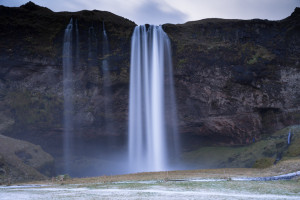 I didn’t realize it while making plans for this waterfall, but the cliff it comes down off of actually has 4 waterfalls very close together. The others just aren’t as photogenic and so largely get ignored by the masses I guess. The waterfall furthest away from the main attraction was actually really cool… as it dropped down from the top of the cliff into a cave. The only problem is that creates a ton of spray and made it nearly impossible to get a good shot of it. The water just covered the lens faster than you could dry it off and take a photo. Then it was off to the biggest waterfall, and the biggest crowd I’d seen at any tourist spot on so far. Getting a photo with no one in the way was going to take some time and patience but luckily there was a huge staircase to climb for a view from the top to take up some time while waiting for the tour buses to load up and take away most of the tourists there. The view from the top of the falls was actually worth the effort. 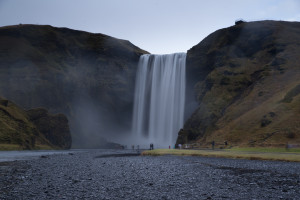 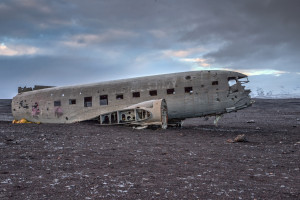 After the big waterfalls, I really wanted to visit the site of an old US Navy airplane wreck that was out on one of the black beaches. It was really wild to get all the way out there and see the carcass of the plane just sitting there. I was surprised how popular the plane was as it wasn’t really easy to drive your car out there and it wasn’t a site that was marked from the main road. 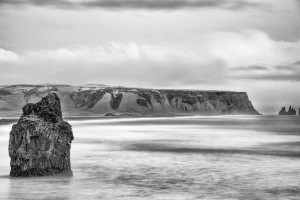 It was starting to get dark pretty quick and we still were a long way from the hotel we were staying at for the night so we hit the road trying to get there before it got too late. Of course, with there being so much to see around every corner it seems, it still look a while. I had to stop at this cool lookout over another section of the black beaches, and try to get a black and white shot of some sea stacks I’d been wanting to try to shoot on this trip as well. It was too late to try to work my way down to the beach so I had to settle for a shot from up on the cliff. I think it turned out okay but I might have to re-edit it at home on my bigger monitor as I don’t think it looks as good as it can with this quick edit. 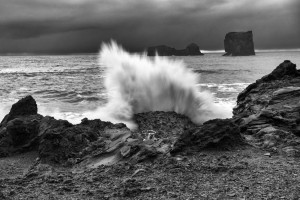 The waves were huge and crashing up against some big basalt rocks about 100 feet over and I thought I’d try my hand at catching them crashing over a few of the rocks. It was harder to get a good shoot of that than I thought it would be, especially since it was so dark now and freezing cold out.

Next it was on to the hotel and to a nice dinner at the restaurant there. It was my first real diner since getting here, and turned out to be a great if not slightly expensive grilled chicken dinner. $40 for a chicken seemed pretty spending but after taking my first bite, I decided it was more than worth it. It might have been the best grilled chicken I’d ever eaten.

Another day was in the books.
Posted by James Miller at 6:07 PM