The wind returned with a vengeance today.  After having such a nice mild calm day yesterday, it was kind of a surprise to wake up to winds today that blew so hard they literally pushed you around and threatened to knock you off your feet if you weren't careful.  They might have been the strongest winds I've ever been in,  but it wasn't going to stop a fun day of exploring more of this section of Iceland. 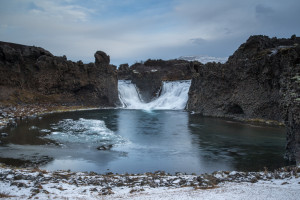 The first stop of the day was a very cool waterfall called Hjalparfoss.  It is basically two rivers coming together as waterfalls, where they both dump into a punch bowl before the flowing out together as one river.   The area was surrounded by Basalt canyon walls and ground that seemed to be made out an old lava flow that was very giving when you walked across it. 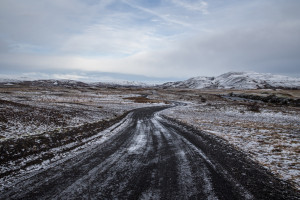 The road to get here felt like you were in the middle of no where, but it kind of made for a cool photo.  As you're looking at this photo, the river that becomes the left hand side of the waterfall, is just to the right of this road.  This is just to kind of give you an idea of what much of this section of the country looks like.


Next there was a small medevil settlement called Stong which consisted of a small house and Viking long-house both with sod covered roofs.  The photos I'd seen made it look very cool so I really wanted to see it myself.  It was disappointing to learn that the building were only open from June 1 to August 31, but it was still possible to walk around them and kind of imagine how life might have been back in those days.  Here is a photo of the small home which had a semi-frozen waterfall on the cliff behind it. The next stop of the day was another waterfall called Faxi Falls.  Did I happen to mention that Iceland has more waterfalls than people.  I was kind of kidding when I wrote that but the more I see of this country, the more I'm thinking that statement might be truer than I first thought.  This one was bigger than many of them, but not even close to being the biggest.  It was very cool none the less though.  Certainly was worth making a quick stop here for some photos and trying to keep from being blown off the edge and into the river below.

After leaving Faxi Falls, we headed over to Geyser which was something I had been looking forward to seeing.  From things I'd read online and photos I'd see, I had pictured it as Iceland's version of Yellowstone National Park.  It sounded like it was a huge geyser ridden area with lots of mud pots, boiling springs and a bigger and better version of Old Faithful.  Well, after seeing it with my own eyes, I have to say I was very disappointed as it didn't live up to any of those claims and in no way will it ever compete with the likes of Yellowstone.  I was actually very surprised ...  It was the first disappointment I'd had this entire trip so I really can't complain too much.  I just thought I'd mention this part to any of you thinking of visiting here.... just to let you know that you can totally skip this stop and you won't be missing a thing really. 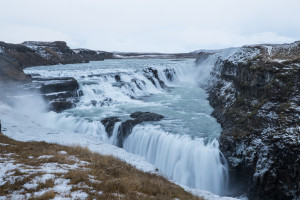 The last big waterfall I had my eyes on visiting on this trip was Gullfoss.  It has been compared to Niagara falls and is one of the biggest attractions in Iceland.  I've seen pictures of the falls before but really couldn't appreciate just how big they were until I got to see them for myself.  They are big for sure, but bigger than Niagara Falls can probably be debated unless someone can show me photos of both falls under a really long measuring tape. 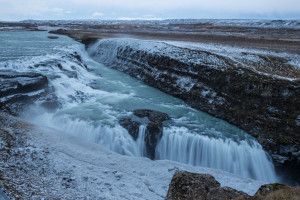 Anyway.... the falls were really cool to watch, well, with the small about of time you could actually look at them that is.  The powerful winds that had been blowing non-stop today really put on a show while at the falls.  The mist that was coming off the water was whipped into your face so hard it felt like you were being hit by hundreds of small needles or maybe stung by a really angry swarm of bees.  It was hard not to laugh and try to fight the urge to run away.   The only thing that might have kept us from running was the fact the wind was already doing it's best to knock us to the ground.  I was blown backward from the camera a few times where I really had to fight to take a few steps back to the tripod.  It was kind of insane, but I think I still managed to get a couple of decent shots of the falls somehow.

As we drove away from the falls, one thought that came to mind that left of laughing by the image the rest of the day.   That thought was that if we could figure out how to bolt a few really good sails to the ground here, we could have sailed Iceland to much warmer waters.  The winds would have easily moved the entire island today.  Heck, as I'm sitting here in bed typing this up, I can still hear them howling away outside.  It's crazy to think that's a semi-normal thing here. 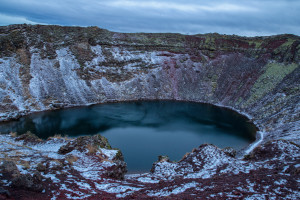 We made one more quick stop before heading to dinner and that was at a very cool caldera that reminded me a lot of Crater Lake in Oregon.  This one wasn't quite as big, but you could easily walk all the way around it, right on the rim of the crater which was a very cool experience, even in the dark with all the ice and snow that was on the ground.  I was still able to capture a few good photos of the lake below even though there was very little light left in the day.


Last stop was dinner at a cool restaurant and ice cream parlor that Rene had read about on a blog before the trip.  We figured since that person claimed this place had the best ice cream in Iceland we just had to test it out ourselves, for scientific purposes of course.  Dinner there was actually really good as was the ice cream.  As for it being the best in Iceland?  I don't know.... we might have to hit another couple of ice cream places on the last two days to do our own comparisons.  I mean, we do have to be sure right? :)
Posted by James Miller at 5:29 PM