Woke up this morning to overcast skies and rain so I decided not to rush out the door and went downstairs for breakfast. Looks like the standard hotel breakfasts consist of breads, meats, cheese, jelly, cereal and some weird fish looking stuff that looks really raw to me. It was almost exactly the same breakfast spread that I had yesterday, so I stuck to my usual of bread and meats as well. Turns out breakfast was a good idea because it stopped raining by the time I packed my bags and loaded the car for another day. 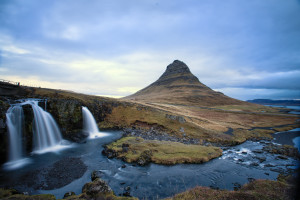 I made another run over to Kirkjufell to see if I could manage a better shot there than I got on my first day. I got lucky this time and was left all alone to shoot a few more photos here. In fact I didn’t see my first person until I was walking back to the car and I ended up passing a nice guy that was from Atlanta. We talked for a bit and shared stories of our travels so far…. He’d already been to a few places that are on my list still so I got some pointers about them and said our good byes.

There were a number of waterfalls on the list for today but it was already looking dark outside because of the cloud cover and it was only noon. I was hoping the clouds would break again and I would get the same kind of light I had all day yesterday but I wasn’t going to get lucky two days in a row I guess. I got rained on pretty good at the first waterfall. I did get luckier at the second and the rain stopped shortly before I got there, the only problem was that the drive was a lot longer than I expected and I spent a lot more time there shooting photos because these falls were just amazing looking. The water was actually flowing out from under a lava field and was spread out along about a 100 yard long stretch of rock. It was the most unique waterfall I’ve ever seen and I couldn’t stop just standing there and taking it all in. 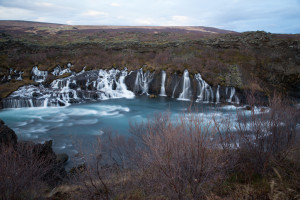 I knew these falls were a little out of the way which is why I ended up skipping them on my first day but now I’m really happy I added them to my list for today. They might be the coolest falls I’ve ever seen and now I am just hoping my photos will do them justice. Turns out it was way too dark to hit the other 4 falls I had planned for the day but I’m not disappointed as I’m sure they wouldn’t have compared to these. That and I have even more waterfalls to visit over the next 6 days so I’m sure I’ll make up for it.

I headed back into Reykjavik to be closer to the airport and now just need to find a way to kill some time. I still have 10 hours until having to pick up at the airport. Maybe I can find a good spot to park myself for a while and look through today’s photos to add to this when I post it later.