I woke up early, before sunrise which turns out to be easy to do when the sun doesn't rise until 9;35... and walked over to the office for breakfast before hitting the road.  The hotel was really nice and on a lake that I really couldn't see when I drove in last night since it was pitch black outside.  I didn't realize there were two huge craters on each side of the little resort area which was very cool to see in the daytime.  One thing I've been surprised at the most here, is the number of craters like this all over the Island.  They just popped up randomly and the people here just built around them over the years I guess.

As I ate breakfast I went over my plan for the next couple of days and decided that I really should move things around on my list and head back south today instead of tomorrow.  There were a number of waterfalls I was going to pass up due to time restraints, but decided that instead of skipping them on this trip, I would skip a couple of things on the north coast instead.  The roads looked icy and I did't want to risk them closing the roads back south if a big snow storm hit over night, especially since I have to be back at the airport Thursday morning early, to pick up another Berlin Brat that is going to travel with me the next 6 days.

On trips like this you can really only lay out a basic plan and then just go with the flow... one thing I really wanted to do was to catch the Aurora over Kirkjufell while I was in Iceland, but since there are no guarantees in life, I didn't want to spend my first full day hanging out at the mountain and then not seeing the Aurora at all... much less getting photos of it over the mountain. I had too many things to see.  Since I spent all night driving that first night instead, I was able to see the 3 waterfalls in the north that I really wanted to see, a full day earlier than I thought, so I drove all the way back south again on Day 3....  seeing everything I missed during the night on the drive north.  The scenery was amazing and so different than I was picturing in my head the night before.  I'm glad I got to see that entire stretch in the daylight. 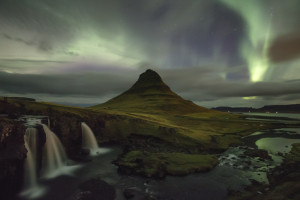 To top things off on what turned out to be an amazing day....  the rain over Kirkjufell broke just as I was about to give up for the night, and the skies started to clear.  I packed up my camera gear and rushed over to the mountain which is 5 minutes from where I'm staying for the night..... and in the small 10 minute window I ended up catching, the aurora came to life over the top of Kirkjufell, and I managed to snap about 12 quick shots.  Here is one of them.


Turns out I made the right decision for the day and got lucky and it paid off.

Now I'm hoping my decision for these waterfalls today pays off as well.  It's raining out right now, but overcast skies make some of the best light for waterfalls.  Here's to hoping for another great day!
Posted by James Miller at 3:27 AM