Today started with a change of plans.  I'd heard that the ice caves were a little too unstable due to the weather still being  a little too warm to make the caves safe, and that people were only being able to go about 3 feet into the caves.   The tour was a little too expensive to not actually be able to go all the way in to a cave, so we decided to bag the Ice Cave tour for the day and just set out to explore as far east as we could go before starting the trip back west tomorrow. 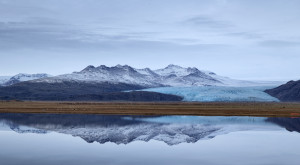 It was a lot warmer today than it has been the last two days and after the huge winds of yesterday, it was nice to not have to deal with any wind at all today.  In fact, it was almost too warm for jackets today.  My hoody and a light pair of gloves really seemed to do the trick for most of the afternoon.  It was fun to continue driving east and to see that we still hadn't made it past the huge Vatnajökull Glacier even after a couple of hours of driving.  We really wanted to try to find a way over to the glacier and found back road that we thought might get us there, but it stopped short....  so we bailed out of the car and thought we might try to hike the rest of the way to the glacier.  That hike include crossing a number of streams though... and wandering up and down the streams looking for decent places to cross was fun for a while....  until we were about two streams away from the far bank and we saw just how wide and deep those last two "streams" were.  That water was a little too cold to want to wade across so we decided to end that adventure and hiked back to the car to see if we could find another route.  We never did though.

Instead we hiked up a small hill that overlooked the valley and gave some amazing views of the mountains, the glacier and the ocean behind us.....   then with a little more exploring we came across a small Viking Village that was nestled in a valley.  It was surrounded by huge mountains on one side and the ocean on the other.  After wandering through the Village though, Rene discovered that the huge rock the jail was located under, was actually paper mache.  We started noticing other things were weird about the place and started to wonder if it was just a re-creation of an old Viking Village.  Turns out, it was really a movie set for a movie that was never made back 2010.  That explained a lot, but it was still a very fun place to wander around and seemed real enough to make me think that's probably how real Viking Villages were laid out back in the day. 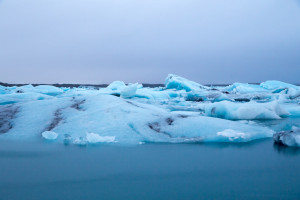 After leaving the village, we ran into the closest town to look around, and hit the grocery store to buy a few things for lunch.  It is always fun to see what kind of foods other countries stock in their stores and sometimes can be kind of surprising. After that, I wanted to make a run to the Glacier Lagoon and shoot some photos before it got too dark.  It was a race against the quickly fading light, and unfortunately the darkness won.  I still shot a few photos but decided we'd just come back in the morning just before sunrise for much better shooting conditions. 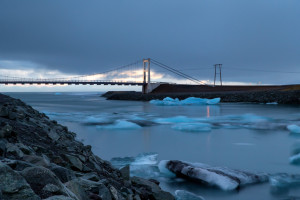 Now I'm wondering how that might work out though because after dinner we walked out so huge snowflakes and snow already accumulating on the ground.  It's still snowing outside right now, 2 hours later... so tomorrow may be a lot of fun in the snow. :)

Oh, one thing I forgot to mention is just how dark dark can be in a country that has very few towns, and no street lights.  It's crazy to be out there in the dark and not being able to see anything at all ... even with the high beams on in the car, you can barely see a few feet off to the side of the road.  It's also quieter here than anywhere I have ever been.  If you ever feel like you want to get away from it all....  this is certainly a place that can help you do that.
Posted by James Miller at 3:24 PM