Woke up this morning wondering what the roads were going to be like today, especially after a pretty heavy snowfall last night.  I think there was close to 1/2 inch of snow on the ground in a matter of 30  minutes last night, but the good news was that it was already melting when we loaded up the car to head on to the next town.  In fact, the main road had been plowed sometime in the middle of the night and was in great shape.

With worries of bad roads out of the way, it was time to finally hit the Glacier Lagoon in good light and try to get some shots of those huge chunks of ice floating away from the main Glacier and out to sea, and then of the ice that washed back up on shore on the black sand beach across the street from there.  This was one of the areas that was tops on my lists of places I wanted to shoot photos while I was here, and it took three trips to the lagoon to finally catch it in some good light, and luckily, to catch it at a time where the water in the lagoon was very calm and still.

The night before, the water was rushing out of there and the icebergs were slamming together and filling the air with what sounded like huge bowling balls being slammed against each other....   only heavier sounding.  It's kind of hard to even describe.   It was kind of amazing today, to try to pick up what looked like smaller chunks of ice on the beach and feel how incredibly heavy they were....  and then to look over at icebergs 100 times their size and watch them being tossed around like they were nothing by the waves.  I could have spent the entire day just hanging out there watching all of that and waiting for new chunks of ice to come floating by.  But I had at least one more stop I wanted to make on the way to Selfoss, which was going to be home for the next two nights. 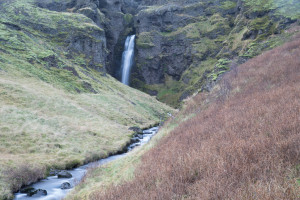 As has happened this entire trip though, I was easily distracted and sidetracked by one great sight after another and once again made a number of unscheduled stops to shoot photos.  Here is another of the seemingly endless array of waterfalls that dot the Icelandic Landscape.  This one appeared to come shooting out of a cave high up on the mountain side, and was just scenic enough to make me have to stop and take a quick photo. 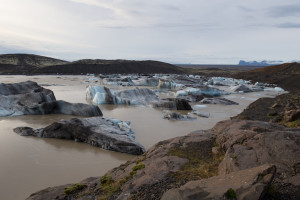 Another stop along the way was at the base of another arm of the Vatnajökull Glacier.  We've been trying to find a route to actually get all the way to one of the Glaciers so we could at least climb up onto it or something but as close as they all seem, it's nearly impossible to actually find a road that will get you all the way up next to them.  Today was the closest we got so far, and the view from the hillside next to the Glacier was amazing.  It's hard to really tell the size of these things from this photos, but these chunks of ice floating out there where huge, most were bigger around than the footprint of a huge home, and with the height of them above and below the water line, I'd bet the smallest were about the size of 3 story buildings.  They were just massive.  Evey now and then the chunk of ice closest to the bottom of the photo would give off a loud cracking noise and I kept hoping to see it split in half or something, but I guess it would take more than a few huge cracks in that thing to break it up. 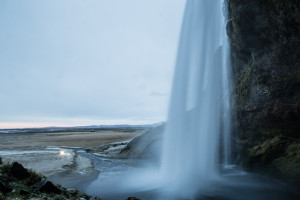 Daylight was ending fast and I still hadn't made it to what was going to be my second stop of the day.  I was determined to get there before it was fully dark out,  so it was a non-stop drive the rest of the way back to the Seljalandsfoss Waterfall where I didn't get the shot I wanted on the first stop there.  The sky didn't cooperate again tonight and there was no pretty sunset, but I went ahead and shot photos again, this time having to walk over some very frozen areas.  The spray coming off here was freezing on everything it touched and in some places the ice looked to be 2 inches thick.  The scariest part was that most of that ice was so clear you didn't even realize it was there until you went skating over some rocks and grabbing on to the ropes around here to keep your feet under you.  It was kind of an adventure all around. LOL