For the final day in Scotland, we decided to take a last minute tour to see Rosslyn Chapel, Melrose Abbey, and then cross the border down into England to visit the World Heritage Site, Hadrian's Wall.

The first time I heard or read anything at all about Rosslyn Chapel, was in "The DaVinci Code" by Dan Brown.  It was a surprise addition to the trip and one that I was excited to be able to go visit and see in person.  The ideas of the mysteries buried there in symbols and codes were pretty intriguing so it was fun to see some of those things and find them on the walls of the chapel myself. I can totally see why it's made people wonder if there was more to it than just blueprints for work on the church itself.  I wish I could have taken some photos from inside the Chapel, but it wasn't allowed so this was all I could really shoot there. 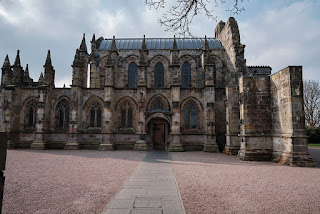 Just down the hill from here is the family home and another set of ruins where parts of the movie starring Tom Hanks was filmed, so I had to wander down there for a look and shoot a couple of photos from that location as well.  It was really fun to see where some of the filming took place. 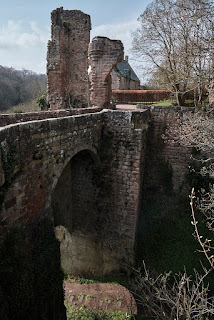 After having about 90 minutes here, it was back on the bus and on to the next stop in a small village called Melrose.  The town was really pretty and situated just on the edge of town was the Melrose Abby, most famous for being the location of Robert The Bruce's Heart.  The King's heart is said to have been buried in the church, perhaps brought back from a crusade with the body of Lord Douglas in either 1330 or 1331. 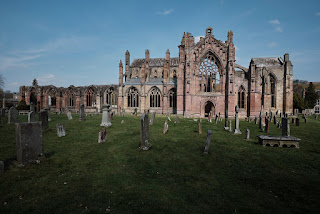 After walking around the Abby and having some lunch, it was back onto the bus and across the border into England and a visit to see Hadrian's Wall.  It's also known as The Roman's Wall, and runs 73 miles, spanning the entire width of England at one of it's narrower locations.  The story as it was explained was that the Roman's had gone north to take all of Scotland along with England as they ruled most of the known world back then, but for some reason decided against claiming Scotland for the Empire.  They then decided to build the Wall to protect themselves from what they called the Barbarians north of the border and this wall marked the northern-most point of the Romane Empire. Construction of the wall ran from 122-128 AD.

This shot gives more of a close up of the construction of the wall and how well it has held together after all these years.  I think it was between 5 - 6 ft high along this stretch of wall. 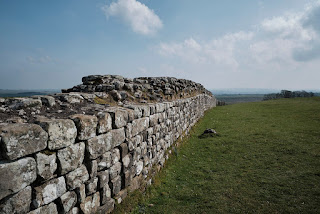 Here you can see the wall running off into the distance up and over the hill in the background. 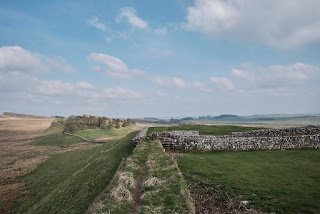 If you'd like to read more about the wall, check out the link here.

After leaving here, it was time to head back to the apartment, pack up the bags and get ready to head back home.  11 days may sound like a lot, but there is just so much that Scotland has to offer, that we barely scratched the surface on things to do and see if you ever go there.  I could have spent months there an never ran out of things I wanted to see.  It's truly a beautiful country.

I'm sad the trip is over but ready to head back home.  I will be back!