Today started off bright and early in the hopes of catching a great sunrise over Dunnottar Castle, a ruin that sits high on a cliff overlooking the sea.  Yesterday was such a sunny day that I had pretty high hopes when going to bed, but woke to find that the weather in Scotland can and does truly change drastically day to day and even hour to hour.  It was a cold and rainy morning and no sunrise was to be seen, much less there being a pretty one today.  That was totally okay though as the castle ruins themselves were pretty amazing to see.  The only downside to getting there so early and not getting to see the sun rise over the castle, was the fact that it wasn’t open yet either to let me look around and explore it some. 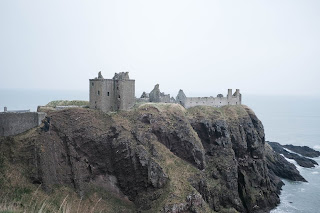 Next was on to Cowie Chapel which was rededicated to St. Mary of the storms in 1276.  The church ruins sit right on the ocean side cliff just as Dunnottar Castle does, but instead of there not being much around, there is a golf course here that sits right up to the church and graveyard and made for a very interesting backdrop to the course. 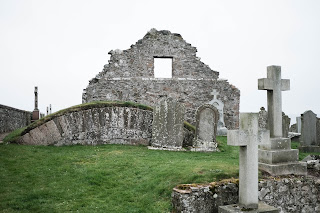 Next up were a couple of lighthouses to see, but there was construction going on at the port and the road to the lighthouse was closed off to traffic until the end of the month. So didn’t stop to take photos and just decided to move on to the next Castle on the list.  This one was called Crathes Castle.  It sits on hillside and is bordered by what is probably a beautiful garden area later in the spring and summer, once everything begins to bloom.  It wasn’t actually so much a castle as it was a fortified home, but taking the tour of the house was pretty interesting and just walking through a place like that and trying to imagine what life must have been like in those times was very interesting. 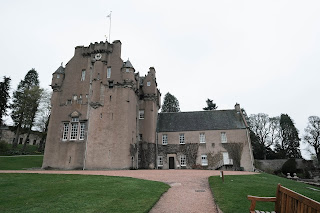 The tour ran a bit long and took up a lot more of the day than planned, so had to change up plans a little as the day went on and just decided to drive past the next two lighthouses on the list and head to Drum Castle instead.


This was another “castle” that turned out to be much more a fortified home as well, but it did appear more castle like than the last one.  Another bonus here was that you don’t have to take a guided tour and can just go in and wander through at your own pace and look at what you wanted and skip the things that didn’t look at interesting.  My favorite room in this castle was a giant reading room that was a huge library with wall to wall, floor to ceiling bookshelves, filled to the max with old books.  It’s a room I would love to have in my house!  I think I might have gotten a few photos of it but didn’t see them on my first run through my photos tonight so I’ll just post one from the outside for now. 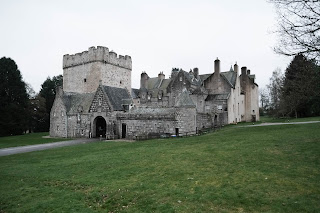 The last stop of the day was another ruin, this one was Slain’s Castle.  I first heard of this castle watching a VLOG by a photographer from Scotland named Kim Grant.  She had made a couple of videos here that were so interesting to watch, and made me put this on my list of must see stops.  As good as her videos were, it didn’t even do justice to this place and make you realize just how big it was.   Like the castle ruins from this morning, this one also sat atop a steep cliff helping to protect it from the ocean side, but what made it my favorite stop of the day was that it was wide open to explore and talk through.  It was cold and the ground muddy, but I could have probably spent another hour there easily just exploring every nook and cranny of the place.  The biggest disappointment though, was that there was trash left behind by people who just don’t care about preserving places like these and they are the reason many of these places are made off limits to everyone.  People just can’t help but destroy these awesome relics from the past and it’s so frustrating to see.  For now, it is still free to visit and explore this castle, but something tells me that might not be the case soon. 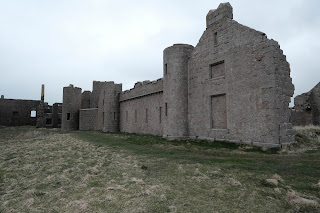 The day was a very fun and interesting one, but it was getting late and there was a LONG way to go to the next stop for the night.  There were still so many stop on the list for the day, but we all hit the road and stopped for dinner about half-way to the next house on our stay.  Even with skipping all the other stops, it was still just after midnight when we rolled in here.  As I type this it’s almost 3:15am… and I need to get some sleep before heading back out in about 4 hour or so.