The morning started off a little overcast and I had hopes that the clouds would hold on until we could make it out to Neist Point.  For a country that is described as even worse than Seattle when it comes to rain and overcast days, it’s sure been sunny and warm every day since the first morning here.  So sunny in fact that it’s made most photography really tough on this trip.  The lighthouse was already going to prove to be a tough location to photograph without dealing with the sun too, so my fingers were crossed, but true to my luck with Mother Nature, those perfect cloudy skies cleared up JUST as we got to Neist Point.  The light was harsh and I was stuck trying to shoot into the sun to make things even tougher but I actually still think I managed to get a few okay shots.


This first photo is of Neist Point itself, just showing how the land kind of swoops up just before a shear cliff wall drops off to the ocean.  When you first get here, you can’t even tell there is a lighthouse out there. 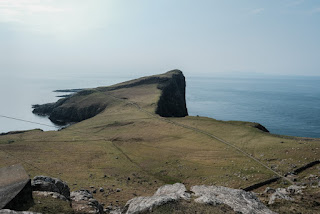 I wandered up the cliffs to the right of the parking lot and headed out until I could see past the cliff, and then got my first glimpse of the lighthouse way out there on the point.  As you can see it’s not the greatest photo of this beautiful location but it gives you a bit of an idea of what it looks like. 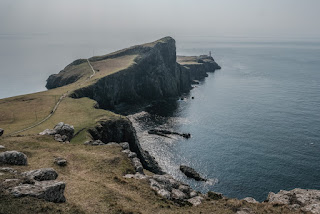 I then made the long trek down to the lighthouse itself which was a nice little hike with amazing views of the cliffs all along the coast.  Photos really can’t even do it justice! 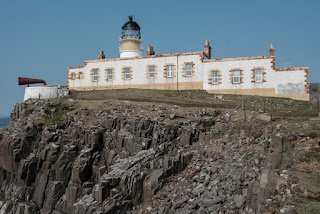 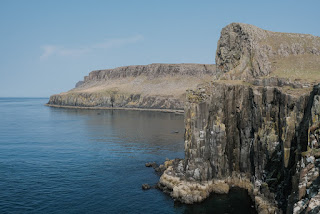 Once we all met back up at the car and had a snack and some water, we decided to try to head to the Fairy Pools, but along the way, we passed a small farm that had a sign out that their sheep were currently having their babies, and there were newborn lambs we could stop in and see.  Everyone wanted to stop to see them as we’ve been seeing sheep everywhere with babies but no places to turn off the road and get a closer look.  There were two lambs that had just been born in the last hour so you really can’t see them too much younger than that.  It was very fun to wander through the barn and see all the lambs at different stages … from the newborn lambs to some that looked to be about a month old.  I forgot my camera in the car so didn’t get any photos but just take my word that those little sheep were so very cute. J


While talking to the woman that owned the ranch, she told us of a Corel Beach on the northern coast of the island that was covered in coral and sand…. And was the only stretch of beach like it anywhere on the island.  Everyone decided that we just had to go see that and we could visit the fairy pools tomorrow morning instead, before having to leave Skye.  It really was kind of wild to see this tiny stretch of beach that was so different than anywhere else we’d seen in Scotland so far.  Still not sure what it’s just this one section of beach that is sandy and filled with little bits of coral right at the waterline, but it was fun to see in person. 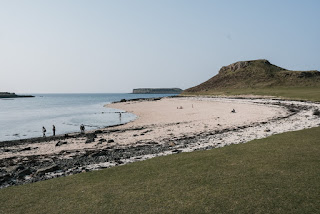 The day was another long one with everything taking much longer than expected, so we decided we should head back to the house, or at least get much closer to it before the sun fully set.  On the drive home there was one more surprise view in store for us, and that was seeing Dunvegan Castle from across the bay.  It almost seems unreal to see these castles like this and really makes you wonder what life must have been like when they were all first built. 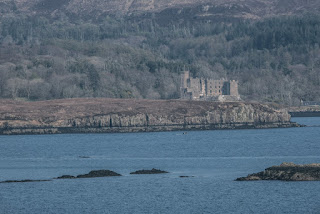 We got back to town and then decided to hit the restaurant that was the busiest around, because we’d heard they have the best mac n cheese in the world.  That and their pizza was a high recommendation and it turns out that both were very good.  It was also a nice change of pace from all the fish and chips we’d been eating. J


Tomorrow, it’s time to leave the Isle of Skye, but we are getting up early to hit the fairy pools for sure before leaving the island.
Posted by James Miller at 8:00 AM