With everyone back on the ship, we sailed off to the next and last excursion of the trip. This landing was at Hannah Point in Walker Bay on Livingston Island, South Shetland Islands.  The point was named after a sealer named Hanna who wrecked his ship there on Dec 25 1820. I kept watching for signs of the shipwreck, but if we were supposed to be able to see it here, I totally missed where it was. This landing might have been the least exciting of all the landings we'd had so far but it was our first really good chance to see more than a random Elephant Seal on the beach.  This beach had a pretty good number of them laying around, some in pretty good sized groups and then as you wandered the beach you would run across a random seal here and there laying off on it's own, tucked up in rocks to help cut the wind I guess.  Can I just mention that seals are pretty boring to watch though? They really don't do much of anything and it started to become a running joke among everyone. Heck, we started to comment that there was some huge excitement happening when one would open it's eyes! LOL 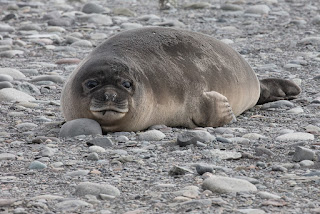 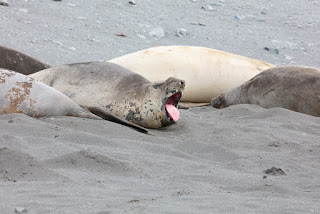 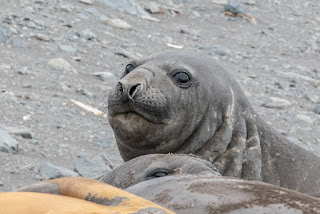 Okay, maybe that's exaggerating things a little bit as there was actually some more excitement than that. We saw a couple of adolescent males do battle a few times. It was fun to watch even if their hearts didn't seem to be totally into it.  It was mostly just a bunch of posturing for the cameras if you ask me. LOL 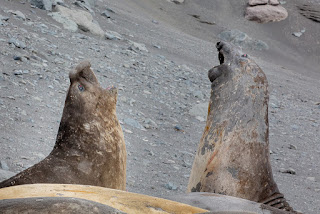 There were some that kept trying to climb on top of others to get warm which was usually just met with bellows of what I can only assume meant "hey, get OFF me!". 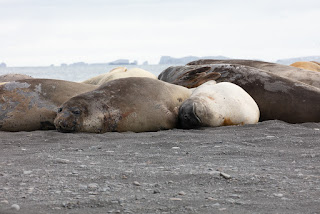 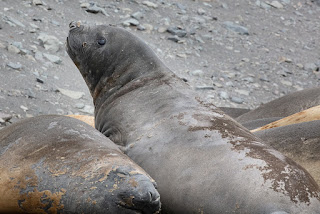 The most exciting seal of all though, was one that was doing something that had to be the equivalent of running the 100 yard dash on the beach. This seal was actually great fun to watch as it would get up on it's front flippers and then do something that appeared to be related to the dance known as "The Worm"... only instead of going backwards this guy was moving forward at a really good pace. I was very impressed!  He would "sprint" about 100 feet and then collapse into a heap with a big deep grunt.  After about 30 seconds of rest though, he was ready for his next "sprint" and would get up and go again.  Another 100 feet, another huge collapse in a heap.  He did this about 5 or 6 times and then the couple of us enjoying the show started to notice he was beginning to cheat now.  He wasn't going that full 100 feet any longer and his breaks seemed to be getting longer with each rest.  Hmmmmm... something's up with that. 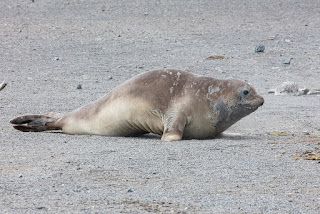 I stopped watching when he finally reach a smallish puddle about 200 yards or so down the beach, where he collapsed one last time in what looked like his finally resting spot for the night.  I heard later that he made some pretty funny faces when he reached the pond and that it really did look like he was wiped out. Turns out he did continue on, but by that time I had started to make my way back to the Zodiac as our landing was coming to a close and it was time to head back to the ship. 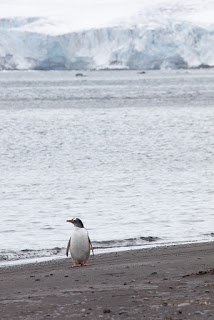 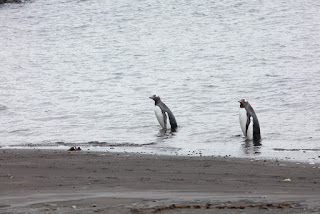 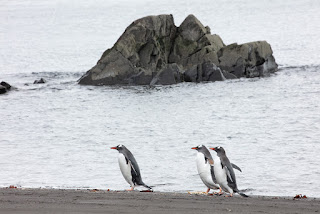 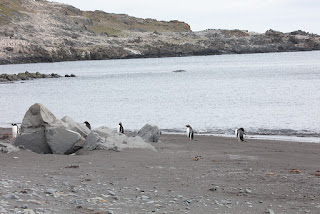 The final landing of the trip was over now... I really am not ready to head home.  I could easily spend another month down here continuing on as far as the ship could take us.  Heck, if we could circle the entire continent, I'd be up for that trip!