The wake-up call this morning didn't come until 6:30 which was nice after the super early start yesterday.  Breakfast was served at 07:00 but I wasn't feeling hungry today so I just took my time getting myself ready and packing my camera stuff for the only landing scheduled for today.

We were doing an 08:30 landing at Hydrurga Rocks which is a small  landing  site  at  the  northern  entrance  of  the  Gerlache Strait.  We were told to expect to see Chinstrap  penguins,  Antarctic  Cormorants and Kelp gulls here, accompanied by snowy sheathbills and Antarctic Brown Skuas. Weddell seals will often haul up on the snow to take naps here too, so we were to keep our eyes open for them as well.

There was a lot of snow at this landing site and with the warmer temps it was pretty hard to walk through. Falling through the snow up to your thighs was a pretty common occurrence for the day.  I think I found myself thigh deep in the snow at least a dozen times myself.  Any time you got off the small path that had been trampled down, you were almost sure to bury yourself.  lol

This location is really pretty (which has pretty much been everywhere we've been now, but it still makes you catch your breath) and has a trail that winds up and around a small inlet of water before wrapping around to the back side of the little island.  If you went up and to the left at the top of the hill, you could walk down to a couple of small penguin groups on the rocks, and one that had taken up residence around an old building which I'm missed hearing what it had been used for or maybe if it was still in use. 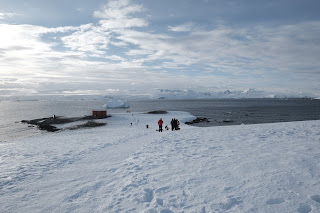 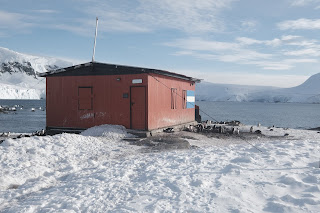 When you went to the right, you could see this high rock on the other side of a small water inlet which was covered in penguins and Blue-eyed shag, an Antarctic cormorant. It was funny to see how Penguins work their way so high up on rocks when you know it must take them forever to get up and down from there.  They aren't the swiftest animal on land. 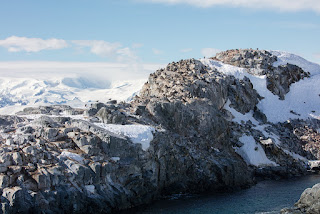 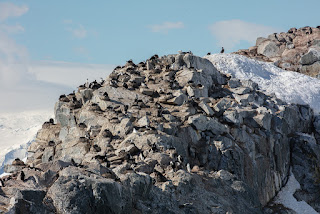 A pair of snowy sheathbills strutted their way around me for a good 5 minutes, not seeming to care how close they got. They aren't the prettiest birds around for sure. 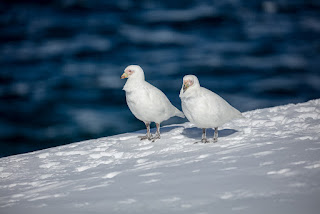 I got a little closer to actually getting a face pic of a Weddell seal... this was about as close as I got but I won't give up! 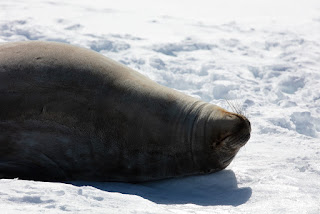 There were a few Kelp Gulls flying around the area too so we really did see everything they'd told us to watch for. 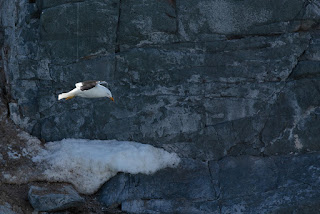 Usually when you see pictures of Penguins, they are fresh out of the water and so nice and clean.  It was pretty interesting to see how that is far from the normal state of these silly creatures.  They are almost always covered in filth because they seen to not mind sliding around mud and their own poo.  Heck this fella looks like he just created some hideous crime somewhere and is making a run for it! LOL  Actually that's just poo I'm sure as most of it is red because of their main diet of Krill.  I know... I just ruined your idea of lovable, cuddly Penguins.  Sorry. Don't worry though, they clean up really well when they hit the water and hunt for food.  They come out looking squeaky clean after a good swim and then you can cuddle away :) 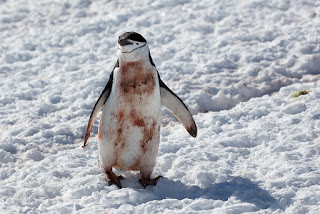 There were mostly Chinstrap and Gentoo Penguins here but there was one lonely Adelie trying to fit in and not be noticed.  It was funny to watch this guy standing in the middle of a group of other Penguins. He stood there like a statue for a long time almost like he was hoping no one would notice him. LOL 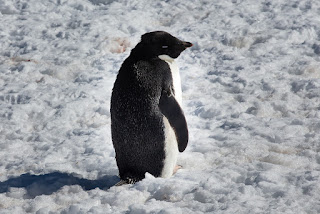 Maybe the coolest thing I saw this morning was a pretty good sized iceberg that was floating just off the beach, suddenly break in half and roll as it tried to settle into a good balanced position again. This thing was bigger than it looked before it rolled, and then you saw two pieces of ice about the size of  large SUVs spinning around.   I wish I had caught that on video but here is a before and after look of it. 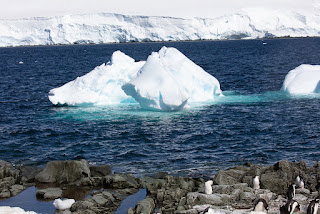 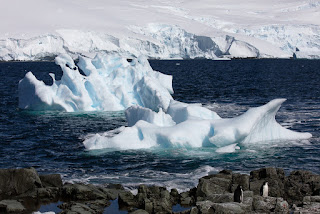 Well, at noon it was time to head back to the ship.  Lunch was going to be served at 12:30 today and then we are scheduled for another fun Zodiac cruise today.  This time I'm in group two so I will have some down time before I get to go out there.  The cruise today is going to take place at Cierva Cove.

Since this entry is getting long again, I'll split it in two like I did with yesterday's blog.  Watch for more later today.  :)