Sleep was really tough last night.  I think I woke up just a few hours after going to bed to the ship really pitching and rolling and hearing a few very loud booms from huge waves slamming into the ship during the night.  Now I know why the beds come with rails on them, it really is to keep you from being rolled right out of bed. They were saying that we would be experiencing mild waves before the trip started and all I can say if the ship feels like its being tossed around like a toy in a bath tub in mild waves, I would hate to see what it feels like in really rough seas.

Looking at the latest report that was posted upstairs though, it looks like the weather report changed as the night went on and the current weather conditions are Gale for Winds of 34-40 Knots and the Seas are listed as Rough.  That would explain the way the ship is just being tossed around right now.
The good news is that I am feeling no effects of sea sickness at all, but just trying to get into the bathroom to shower this morning was a crazy adventure.  It’s really hard to stand up and I was seriously worried I might get thrown right out of the shower when I first got in there this morning. Luckily there is a rail in there to hold on to, but taking a shower one handed is no where near as easy as you'd think.  LOL

Time to head upstairs and sit in on the first talk of the day. I decided to skip breakfast this morning.  My body just can’t adjust to the time yet and there is no way I can eat breakfast when it feels like 3 am to me. I usually never eat breakfast at home until 10am as it is.

Its looking and sounding like there are quite a few people that are feeling sea sick due to the way the ship is just rolling back and forth right now.  They still say this is pretty calm for the Drake, so now it totally makes sense why they were pushing the sea sickness meds so hard at dinner last night, even to people who never suffer motion sickness.  Even though I’m still okay, I have never felt a ship move like this… heck, I haven’t even felt a small boat on a lake bounce around the way we are right now, and looking outside the seas really don’t look THAT bad.  It’s some kind of weird optical illusion I think.

The morning has mostly been filled with talks. It started with a lecture on "The Art of Seeing" and then after a short break there was a talk by one of the wildlife experts on "Seabirds and Penguins".  She mostly covered all of the wildlife we should be seeing on the trip and shared pointers on how to tell the difference between many of the different species we may see.

The slight rolling motion of the ship has been getting worse as the days goes on, and people have been flung across the ship more than a few times now. It really is no joke that you should told on to the hand railings whenever possible and to really try to time the rolling motion when you walk across the room.

During the breaks between talks, I’d gone outside to attempt to shoot photos of some of the birds following the ship, but shooting photos of birds in flight is tough enough on a good day and its even tougher when the ground underneath you is pitching side to side 12-15 degrees. I have to say I’ve gotten really good at surfing the deck while trying to shoot some photos now though.  I’ve managed to just stand out there without holding on to anything and ride the ship like a surfboard while taking photos. Being able to stand out there doesn’t mean I got a single good shot though!  LOL

Here are some of my better shots of birds so far... 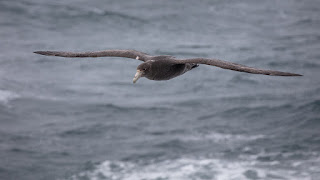 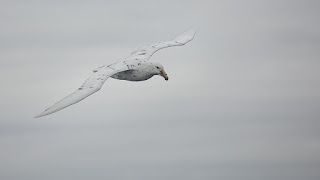 They finally closed the deck to us and no one is allowed outside any longer today.  The ship is really bouncing around now to the point where it almost looked like waves were going to roll up on the deck a few times as we rolled WAY over to the side.  We’ve done that a few dozen times now and you can almost time it when it happens.  It’s very crazy to watch it happen out the window but not scary or anything. It’s kind of become the norm today.  I can’t even imagine how bad this crossing would be in bad weather with big seas.

There were a couple of more talks during the afternoon before dinner and one after dinner.  They covered topics on Wildlife Photography, Photographing Birds and then after dinner there was a great slideshow and talk about photography in Antarctica put on by a guy that's made the trip 34 times now.

Everyone headed to bed right after that final lecture and I’m the only one up in the lounge other than the crew so maybe I’ll head to bed now and see if I can’t get a bit more sleep tonight.  We are supposed to reach the Shetland Islands tomorrow afternoon and have our first excursion of the trip around 4pm! They also said that the seas will be much calmer once we get inside the cover of the island which made more than a few people happy.  I’m curious to see just how must calmer the water will be.
Posted by James Miller at 10:00 AM