Breakfast was served at 07:30 again this morning, and once again I decided to skip it because I still can't adjust to eating when my body think's it's 2:30am. LOL

Our first landing today was at 9:00am at a location called Brown Bluff.  When you see the photo, the name will make perfect sense. :)  Brown  Bluff  is  an  ice-capped,  flat  topped,  745m  high  mountain with a prominent cliff of reddish-brown volcanic rocks. It is part of the northernmost continental extension of the Antarctic Peninsula, and home to thousands of Adelie Penguins, a few hundred Gentoo Penguins  and  a  mix  of  Kelp  Gulls,  Skuas,  Snow  Petrels,  and Pintado Petrels. It is located by the Antarctic Sound to the east of Hope  Bay. 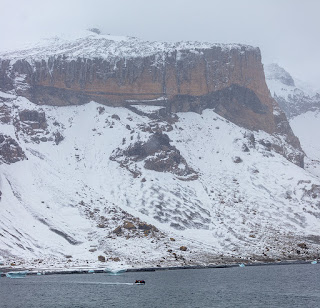 Today was the first day where the weather finally looked and felt like what I had always Antarctica to be like.  The sky was grey, the wind was blowing pretty hard, and it was cold out there.  In fact, before we headed to the land, we were told that our stay may have to be short because the ice was already beginning to move back in.  The captain said he would stay as long as he could, but if the conditions got much worse, he would blow the ships horn twice and we all needed to get back to the ship ASAP.

As we headed to land, things didn't look too bad out in the bay even though you could see a few huge icebergs way off in the distance.  We were met on the shoreline by lots of Adelie Penguins and right away you could see how different their behavior was compared to the Gentoo and Chinstrap penguins we had been seeing up until now.  For one thing, these Penguins were so much faster on land than the others, and they behaved differently as well which became so very entertaining to watch. The first thing I noticed is that ran up and down the beach in single file, and you couldn't help but kind of laugh as the would go running past you or up close to you where they would stop and check you out. 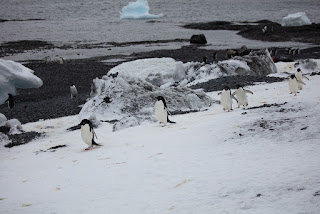 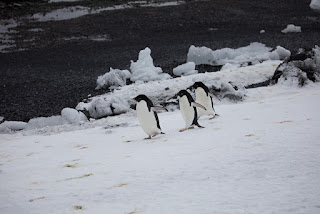 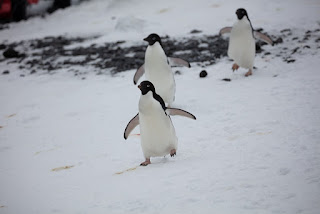 The other thing that was very different was the way these guys would all gather together at the shoreline. While the Gentoo and Chinstrap penguins would go into the water a few at a time or even by themselves, the Adelie seemed to only work under the assumption that there was safety in numbers.  A few of them might actually go up to the water's edge and appear ready to go in, but they weren't going anywhere any time soon.... as they insisted on waiting for much larger numbers to come join them before even attempting to jump in.  It was so funny...  to see the way they would bunch up and then seem to wait for one brave, or extra hungry member of the group to be the first to jump in, after which the rest would suddenly dive in behind him until yet another penguin in the group would freeze up, causing the penguins behind him to stop as well, and even run away from the water for a second until they realized they should have gone because this one dummy only got cold feet and now they were all stuck again, waiting for the whole process to start over.  LOL

You can't really see all of that in action  in the photos, but this gives you a little idea what it looked like.  LOL 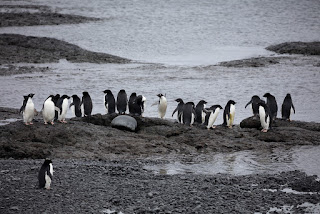 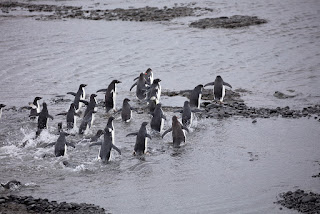 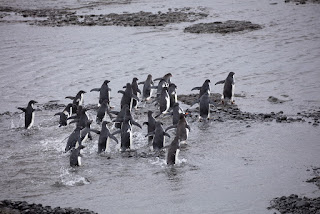 As we were all sitting there enjoying watching these silly penguins run up and down the beach, and watch them struggle to decide if they wanted to risk diving in to the water to eat, it started to snow and the wind began to pick up.  We suddenly got the call that we had to get back to the ship right now, and everyone was good and rushed back to the Zodiacs.  I think it might have been the fastest they have ever gotten everybody back on board and as soon as I got up on the ship, I could see why the captain made the call that we had to get moving, and now!

Where the bay had been fairly free of ice when we first left the ship, this is what it looked like as we got back on board. 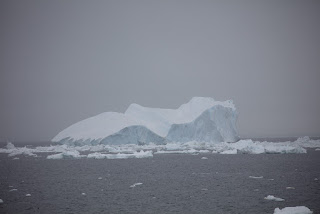 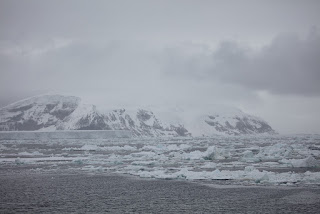 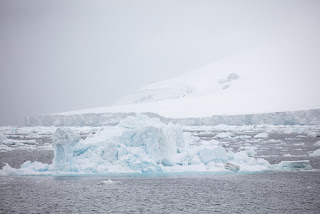 The ice had seriously moved in on us, and the last thing we wanted was to get stuck here in all that ice for who knows how long if it froze up all around the ship.


So, the visit to Brown Bluff was cut short, but we finally experienced just how fast the weather and conditions here can change, and we got to feel what the weather in Antarctica probably feels like more often than not.  Up until now we've had spring like temperatures... this was more like it!  :)