There was a very early wake up call this morning.  At 4:00 am the wake up call came across the intercom to get everyone up and moving around and ready to make our second landing of the trip.  This morning's landing was in Mikkelsen Harbor, a small bay on the south side of Trinity Island between Skottsberg Point and Borge Point, in the Palmer Archipelago.

The weather conditions were actually pretty nice, with a small breeze (17-21Knots) and a Temperature:  of -3ºC | 26.6 ºF at the time of the Zodiac ride across the harbor.  The morning was beautiful and the sunrise that was still happening lit up the area all around us with the most beautiful light. If I hadn't already packed up all my gear into the dry bag, I would have been taking pictures like crazy.  I just hoped we would get to the land before the light went away!

The Zodiac ride over to the landing spot wasn't very long this morning and the water was much smoother than we had on the ride yesterday.  I don't think there were many big splashes this morning which made me regret not getting my camera out earlier but it's always better to be safe than sorry.  There are still way too many days of photography ahead to risk shorting my camera out now.

Here is a look back at the ship where you can still see the way the early morning light is just touching the mountains around us. 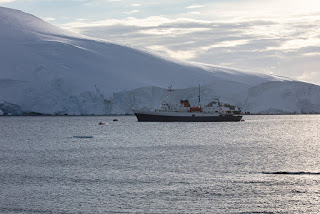 The following photo shows how beautiful the light was even more... I just wish the photo could also let you hear how quiet and peaceful it is here!  The penguins are even being quiet this morning compared to the loud group we saw yesterday. It's truly an amazing place. 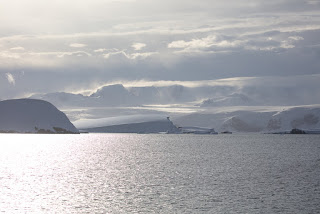 The first, huge difference in today's landing is that today we have tons of snow and ice around us compared to that muddy mess we had to walk around in yesterday.  I have to say that the smell today isn't nearly as bad either which was a nice surprise. I think the snow really helps keep everything a little fresher.  I know I certainly enjoyed walking in the snow a lot more!

One of the first animals I saw was this Skua just laying in the snow near our landing site.  It didn't seem bothered at all by me as I got closer to take it's photo. It just laid there watching me. These are one of the biggest threats to Penguins on land, as they like to feed on Penguin eggs and chicks.  Maybe this one had already gotten its fill of eggs this morning. 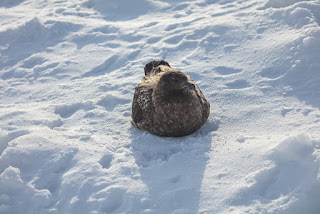 There was also a seal nearby just lounging in the snow down by the water.  I waited and watched it for a while to see if it would move so I could get a better shot, but turns out... seals don't do much of anything once they find a spot to snooze.  I finally gave up and realized this would be the best photo of this seal I was going to get today. 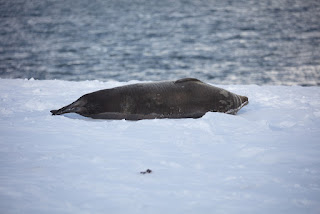 The penguins here are all taking advantage of the few places without snow, to build their nests and lay their eggs.  There were only a few spots on this island with bare land visible and most all of it was taken up the the mating pairs. I have to say, they sure have some amazing views from their chosen spots! 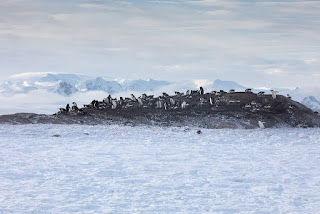 There would be these little rock outcrops here and there and on every one of them, you'd see a few more Penguins.  They don't seem to let much open ground go to waste this time of year.  Once again, this nest just has some amazing views. 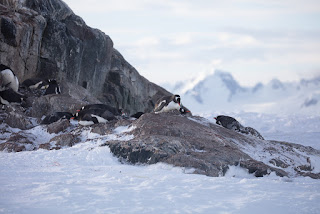 Another thing I've learned is that Penguins aren't the quietest creatures around.  They are constantly squawking and calling out. You can see one of them here doing it.  I think I was able to get some good video footage of them where you can hear what it sounds like. I'll have to post that later when I get a change to go through all my video footage. 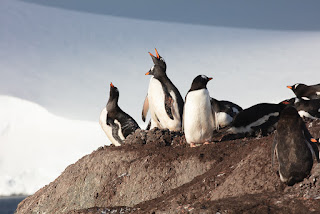 It was fun wandering around in the snow and just watching these few groups as they woke up to start their day.  They weren't nearly as active right now which made watching them easy, but made getting any kind of interesting photos a lot more difficult.

When it was time to head back to the ship, I just had to stop and take one last look around.  This entire bay is surrounded by amazing Mountains, with Glaciers and snow packs that have to be seen to be believed. I can't even explain the scale of how big these things are... but hopefully the photos can give you an idea.  Look at the way all of that snow and ice just goes right down to the water's edge! 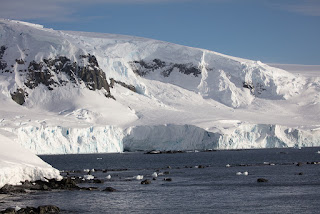 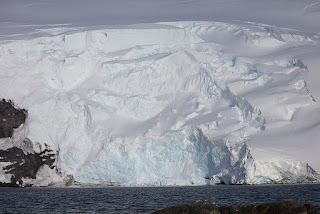 Oh, and just for grins, here is a picture of TWO seals that joined the beach party .. and yep, they were just as exciting as the first fella I saw this morning.  I guess they are better at doing rock imitations than they are at looking like active animals.  :) 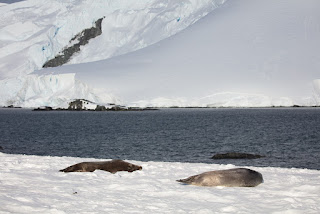 This post seems like it's getting pretty long so I'm going to break it into two parts.  Watch for part 2 later today :)
Posted by James Miller at 10:00 AM