When I finally woke up, I realized just how tired I must have been because I think I slept close to 10 hours and had maybe only woken up once all night!  That’s so rare for me that I can’t even remember the last time I slept that long or that well.  I felt great this morning so got ready for the day and grabbed my camera and decided I would explore the rest of the town and take some photos of murals I had seen the day before while out exploring.  It seemed like there were a few dozen murals throughout the city and I decided I would only shoot the better and more interesting ones I could find. 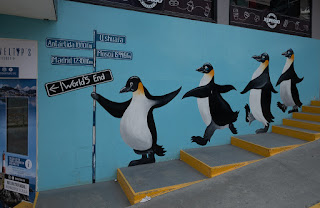 The mural above, has become very famous on Instagram from what I was told, and I guess it's a popular place for tourists to stop and pose with the penguins with all kinds of crazy selfies and shots of themselves.  I didn't go looking for any examples, but I assume you could find them out there if you try looking as I watched 4 different couples taking those kinds of shots here, spending 15 - 20 minutes each trying to get that perfect photo to impress their friends I guess.  LOL   I kept coming back until I finally got a lucky break between the Instagram fanatics and snapped my shot in about 3.5 seconds. I just wanted to get one with my life and see more of the town than just this mural I guess.  LOL

The following are all part of a long mural along a wall near the hotel I was staying at. I couldn't get the entire thing into one shot, so I broke it up into pieces... 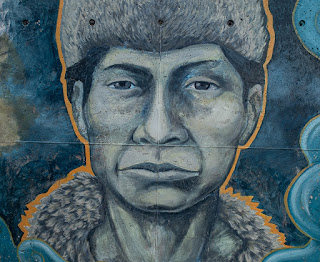 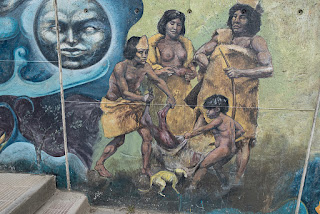 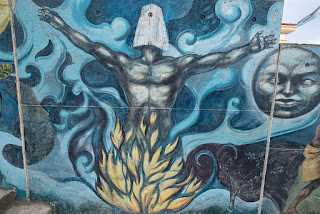 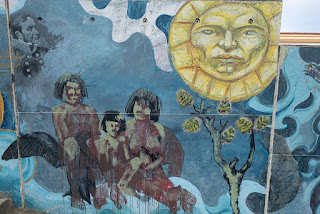 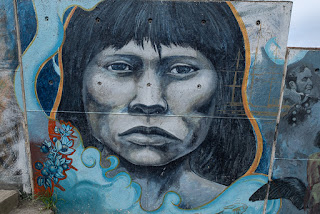 The following was just really interesting to look at and I wish I could have found out more about the story behind it. 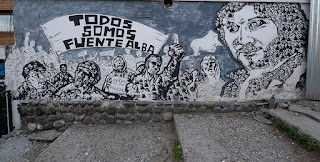 I always enjoy exploring new places and getting away from the streets designed to draw in the tourists… so I headed up the hill to the top of the city and started to wander through the neighborhoods just seeing what life was like or at least trying to get a feel for what it must be like living here.  People seemed friendly and although the streets and sidewalks were a bit beat up, the houses looked well kept and I even passed a few people already out cooking meat on the barbecue, either for lunch or if they smoked it all day, for dinner.  Argentina is known for its meet, and I’m thinking they take it pretty serious from how much care they put into slow cooking it.

I passed a few playgrounds that reminded me of the playgrounds in Germany, where there were big fences around the soccer fields and basketball courts to keep the balls from flying out into traffic.  There were kids playing in all of the ones I passed by. The laughter and noise just made the streets feel alive and kind of made the walk that much more fun.

After a few hours of wandering the residential streets, I decided to head back down to the hotel as it was getting close to the time for our first meeting for the excursion.  The trip still didn’t feel real even though I was now 7700+ miles from home.  I don’t think it will feel real until I’m on the ship and we pull out of port, but at least the meeting where we get our passes and last minute info will make it feel like it’s really going to happen.

The meet and greet with the group going on the expedition went really well and I met some of the people that were going on trip and met a few people I knew I would have fun hanging out and talking with while we sail south for 48 hours.

After the meeting ended,  I grabbed dinner with one of the guys I had met, and we decided we had to try out a steak place just down the street from the hotel.  When I said they were serious about their meat here, I don’t think I really knew how serious until we hit the restaurant.  I made the mistake of ordering the “big steak” and looking at the price I assumed it was going to maybe be an 8 oz steak. Imagine my surprise when it showed up and looked to be a pound if it was an ounce!  Yikes!!  Those of you who know me know how slow I eat, and I quickly realized two things… one, I could never finish that steak, and two… if I even attempted to try, I might be there 4 hours or so. LOL  The steak was excellent and I did my best, but think I barely managed to eat half of it, without anything else but a couple of bites of mashed potatoes.

Now that I was full, and I had been walking half the day, I decided I should attempted to get one more really good night of sleep, as it may be 12 days before I sleep really well again.
Posted by James Miller at 10:00 AM