Got up at 3:00 am so that I could shower and be ready to head out of the hotel by 4:00am and get to the domestic airport here.  Even though it was so early in the morning, there were still a lot of people out and about on the streets of the city, looking like they were just heading home after a long night of partying, or maybe just moving on to the next part.  I asked someone about that at the airport and they said that the city parties all night long every Friday and Saturday night and that was totally normal.
The good news was almost everyone I saw that morning was walking so the streets were pretty empty and I got to the airport in less than 15 minutes.  As bad as immigration was coming into the country, security to fly out to another part of Argentina was so quick and easy and I was through security with plenty of time to spare.

The only real difference between flying domestically here as opposed to most other countries I've been to, is that to check a bag, you have to check it at airline’s counter where they weigh it and put in on the conveyor belt, but then you are handed a receipt for the bag and sent down the hall to a cashier window to pay the checked bag fee. It was strange they couldn't take the payment at the counter.  The cashier was kind of hard to find at first, and then after I paid the fee, they printed me a new boarding pass and sent me on my way.  It was a totally different and not all that efficient experience really, but the airport wasn’t busy at the time so it really didn’t add all that much time to my check in process.  If I wouldn’t have been so early, it might have been more stressful as there were only two people there to collect the baggage fees for all the flights that morning.

The flight to Ushuaia was smooth and only took about 3.5 hours. Ushuaia is known as the city at the end of the world for good reason. I have to admit it wasn’t what I expected or pictured in my head.  I was thinking this would be some really small port town where a few ships docked, but it was actually a nice sized town completely surrounded by big mountains that seemed to loom over you as you walked around the streets there. It's beautiful to see the way the mountains loom over the city like that. 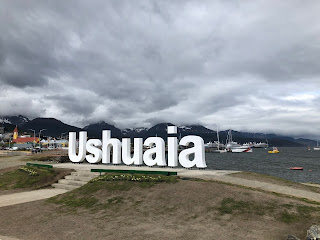 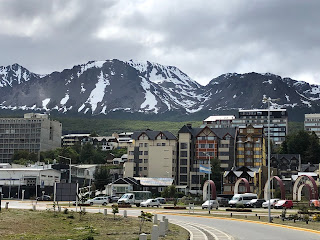 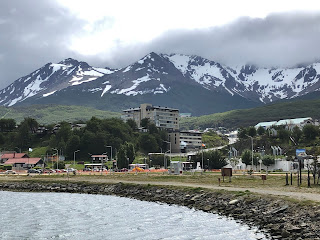 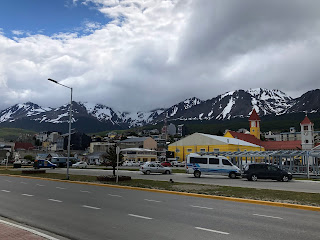 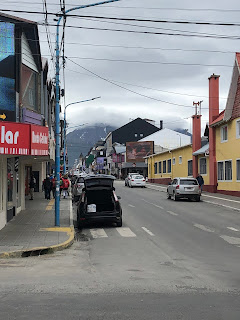 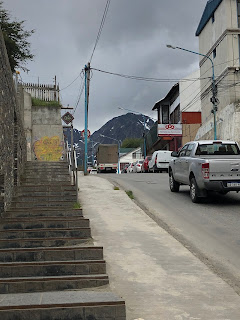 I hadn’t eaten in over 24 hours so I was getting hungry and since I got to my hotel before I could check in, I hit the restaurant there and had some lunch.  By the time I finished lunch, my room was ready and I got all checked in and settled, and decided to head out and explore the town a bit.  I hadn’t slept much in the last 24 hours, so it was just a short exploration of the main street with all the tourist shops and restaurants tonight. By the time 10pm rolled around I was beat and called it a night and thought I should try to get as much sleep before getting on the ship as I could, since I knew sleep would be hard to come by once on board the ship.
Posted by James Miller at 2:00 PM