Today was a very interesting day.  Our first stops of the morning were at Port Lockroy and Jougla Point.

The entrance into the harbor was just stunning and might have some of the most beautiful scenery seen so far. Little did I know what I would be seeing later this afternoon.  Here were the views on the way into Port Lockroy.

This was looking out the back of the ship as we cruised into the harbor. 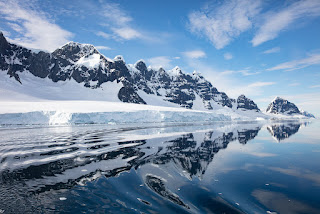 And then this was the view looking forward to see where we were heading. 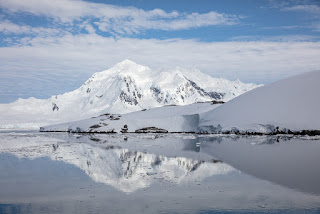 A Zodiac was sent out to pick up two of the volunteers from Port Lockroy who were going to come and give a talk on the history of the base, and answer any questions people may have about what they do here, what life is like being almost stranded here for months on end, etc. 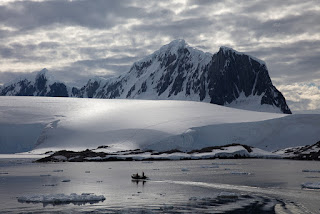 Before heading to Port Lockroy though, I went with the first group of people to Jougla Point.

Jougla Point  lies at  the  southwestern  end  of  Wiencke  Island  and  juts into  the  small
harbor  of  Port  Lockroy,  a  protected  anchorage  entered  between  Flag  Point  and Lécuyer
Point. This point is a rocky peninsula indented with small coves, a point forming the west side of
the entrance to Alice Creek in Port Lockroy, in the Palmer Archipelago. Snow cornices, glaciers and
extensive, steep, and highly crevassed snowfields surround the Harbour. It was discovered and named by the French Antarctic Expedition, 1903- 1905, under Jean-Baptiste Charcot, who considered it to
be a peninsula.

I won't bore you with more Penguin photos but yes, there were more penguins here but not as many as we have seen at some of our other landing spots.  The weather was great and it was just nice to get out and walk around taking it all in while waiting for our turn to head over to the base.

Port Lockroy at Goudier island was a previous British Base, known as “Base A”, and now designated as Historic Site and Monument #61 under the Antarctic Treaty System. It is operated by the United
Kingdom as a living museum. In addition to Bransfield House (the main base building), there is a
boat shed, building foundations and a number of associated artifacts on Goudier Island. It was
built by the ending of the WWII, to prevent from further nazi settlements.

It also houses the only operational post office in Antarctica as well as a small souvenir shop. I think everyone on the ship was looking forward to the chance to mail off postcards from here, that would actually come with a stamp that was canceled in Antarctica.  I know I just had to mail a postcard to myself to have something to remember the visit and to keep as a memento.  I also was happy to find out I could keep up my tradition of buying a hoodie from everywhere I've traveled as they actually had a hoodie for sale here.

You can see the base here in this photo. That really is all there is to it.  A very small island, with no boat, no running water and no plumbing.  Yeah, you read that right and now can imagine how hard life here must be.  :) 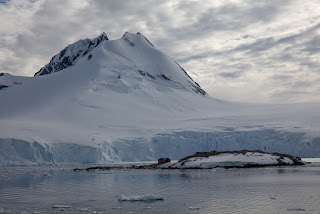 Okay, so I'm going to share a funny story here.. I bought a postcard for myself and one for my daughter and wrote each of us a short little note to mail from here today. I quickly learned that sleep deprivation really does effect brain function as when I went to address the postcard to myself, I honestly could NOT remember my home address!  I sat there totally blank trying to remember it, and to make things even funnier, I forgot I had my wallet in my back pocket which has this little thing inside it called a driver's license.  On that license is my address.  Did I remember that?  Nope! After about 5 minutes the address finally came to me, but I think this was the first sign that I really needed to start getting some sleep on this trip.  LOL

I thought the view this morning was one of the most beautiful I'd ever seen and couldn't imagine anywhere else on this trip beating it.  Little did I know how wrong I was, and just how short the wait would be to see what might be the most beautiful place on the planet.  And yes, I still think so even now that the trip is over.

This afternoon, we made our way to the Lemaire Channel, which is a 11km long and 1600 meters wide strait off Antarctica between Kiev Peninsula in the mainland’s Graham Land and Booth Island. It's been nicknamed “Kodak Gap” by some because of its scenic views and once you see it, you'll totally understand why.

Instead of posting a bunch of photos here to try to give you an idea of just how beautiful this place was, let's try something different, here is a link to a timelapse video on my website that is about 5 minutes long, and kind of let's you get a feel of the experience of sailing a ship through the Lemaire...
https://www.jamesmiller.photography/Videos/i-rtzNJ5D/A

When we get close to the end of the channel, there is a huge iceberg and sheet ice in front of us, blocking the rest of the way through. You can kind of make it out when the ship slows and starts to turn around.  I'd say I was disappointed we didn't get to go the rest of the way through, but I'd be lying because having to turn around, meant we got to witness this beautiful place a second time and have even more opportunities to shoot photos that might hopefully capture it's beauty.