After getting back on the ship, it was time for breakfast.  I normally skip breakfast but now that I've been up and trudging through snow for a couple of hours, I worked up an appetite so had to check out the offering.  Breakfast on the ship is buffet style, and they had put out eggs, bacon, toast, fruits, cereal, yogurt, and a few other things I probably missed.

After breakfast, we suited up again. This time it was going to be for a Zodiac cruise in the waters around Spert Island, an island lying off the west extremity of Trinity Island, in the Palmer Archipielago.  They had to split everyone into two groups in order to get us all on the available Zodiacs for a 90 minute cruise around the bay.  I was in the early group today.

The water was really smooth and the Zodiac ride was awesome. Just feeling the wind on your face, smelling the fresh air, hearing the water splash around us.. it really felt like you were IN nature now more than just observing it.  The views all around us were amazing but with people on each side of the boat, it was kind of hard to get great shots without someone getting in the way.  It took a little time but we finally figured out a method that seemed to work well.  people on one side would kneel down on the floor while the other side took photos over your head and then we would switch when the views were on the other side of us.

I was really surprised at just how beautiful the weather was and how warm it was on the Zodiac.  I was so worried about being cold on this trip and so far, I've been anything but. Even on the water like that. :)   Here are a few shots to give an idea of how things looked:

The first two shots have the Zodiac in them to try to give an idea of scale to the area we were in, and to the size of one of the icebergs that was just sitting behind the ship when we offloaded. 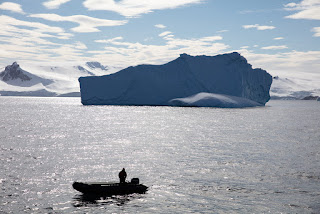 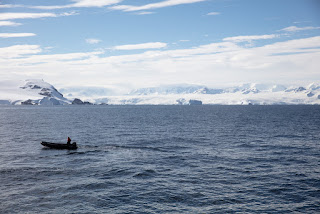 Here are two more shots looking on each side of us to show you how big this bay is and just how smooth the water is right now. 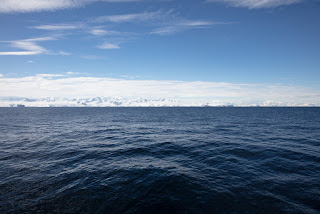 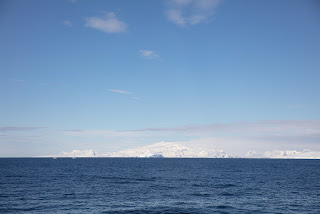 And this shot hopefully gives you at least a little idea of how massive those mountains really are. I felt really small sitting down on the water looking up at them.... heck, just that iceberg in front of the mountain was massive! 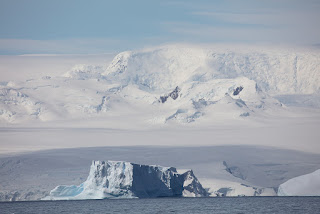 Here is another shot of that iceberg with a Zodiac closer to it, so you can really see the size of it. 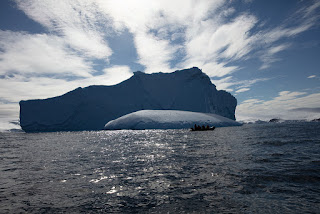 After going around a few icebergs and getting up close to them, we wandered further out and over to this massive rock and channel between them.  There was a big chunk of ice stuck in there that totally blocked our ability to pass the rest of the way through there, but it was fun to get up close to it and just see how wedged in there it was. 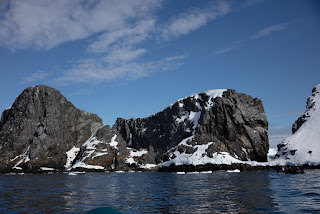 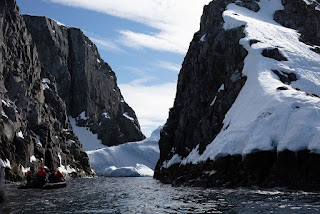 In the photo it looks like that thing might be connected to the rocks, but it was actually fully free floating in there.  When we got up and super close to it, you could watch it just bobbing up and down on the water and it didn't seem possible as that chunk of ice had to be the size of a 2 or 3 story home.  Yet it just bobbed around effortlessly between those huge slabs of stone. 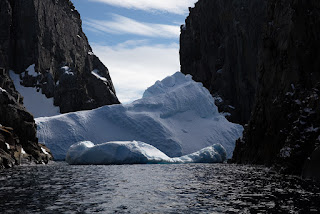 This was just a quick shot, looking back at the ship to see just how far we've traveled so far, and we were still moving further away when I shot this. 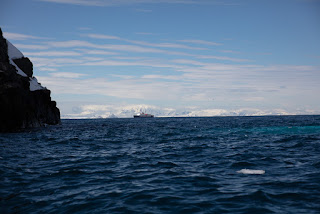 There was a very cool rock arch hidden way from our view until we got close to it, and then two small caves as well.  We tried to talk the driver into taking us through there, but he wouldn't risk it because he couldn't be sure how safe that would be. 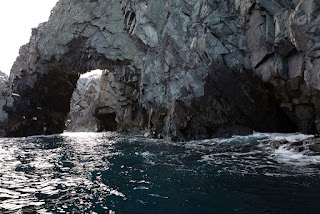 Here is another decent sized iceberg that has been worn smooth by the seas over however many years it's been out there floating around. 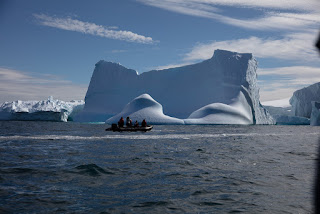 There was a little bit of a ice jam back here... at least until the winds and tide change again and all that huge ice floats back out into the bay. And then totally unexpectedly, we saw our third type of Penguin out there..  this Adelie Penguin was far from home and much further north than they usually travel. No one seemed sure what might have brought him so far north, but for now it was taking a break from swimming and just hanging out up on a rock shelf. 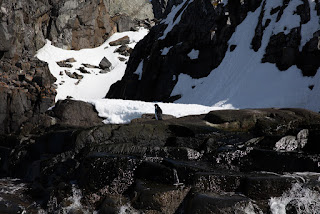 The 90 minutes out there went by so very fast. I couldn't believe it was already time to get back to the ship, but there was another group waiting for their turn so back we went.  Here's what it looks like looking up at the ship from down on the water. 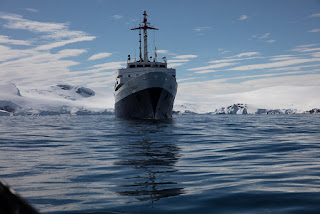 The rest of the day was spend on the ship and was pretty relaxing.  We were served lunch at noon, and then after a short break there were a few lectures again. The first was on the Exposure triangle at 13:30 and then at 15:00 there was the first Critique session where everyone was asked to pick two shots to share with the group and then the Pros would tell you what worked or didn't work with the shot and ways to make them better.  That session was great and it was interesting to see what other's were shooting.

Then it was dinner at 19:00 and Critique session #2 which mostly covered the photos that the first session didn't get to.  After that, a lot of people headed to their rooms to sleep after getting up so early, but the light outside was looking good and I wanted to stay up and see what came of it, along with a handful of others.  Looks like this might be the regular night owl group as it's the same people again tonight as it was last night.

The wait paid off as the light was pretty amazing tonight.  Now to find out if I got any great shots out of it.  It's too late to look now... it's almost 1:30am and I need some sleep!